I’ll Be Seeing You 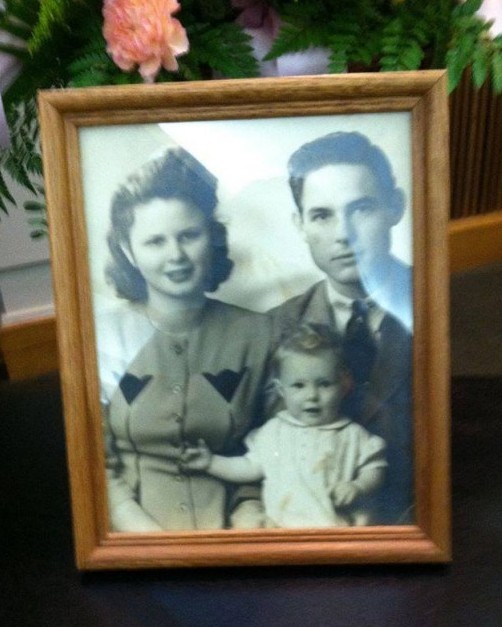 Willie and George with Baby Georgia, circa 1943

My maternal grandmother died just this past month, but had she hung in a while longer, she would have turned ninety on September 7, 2014. My grandfather was her one and only love, and they’d been married since they were teenagers. Like many Americans of the Great Depression era, their lives as children had been difficult, but their love was both enduring and redemptive for them.

George was a young Marine during World War Two. He ended up landing via submarine in Japan, where his platoon fought in the famously brutal battle of Okinawa, where he lost all his men and was himself shot, but survived. Willie, like millions of other American wives, waited for him back home with steadfast loyalty, and hoped and prayed that he would be returned to her in one piece.

My mother, Georgia, who is the little girl in the photo, was born in the middle of the war, and Willie and George would go on to have two more daughters once it ended. So, I never knew them as they are pictured here, but funnily enough, it’s how I like best to remember them: young and fresh and somehow innocent despite the serious challenges they’d already overcome, and those they were no doubt facing when the photo was taken (circa 1943). Maybe they just made people tougher back then, as I know a lot of men and women of my grandparents’ generation who embody a combination of dignity, stoicism, quiet wisdom, and grace that is not evident in the generations that followed them. My parents-in-law are of this same generation, and are cut of similar cloth, though they are English. As my mother-in-law was speaking of Churchill over dinner two nights ago, she said, “He was a real statesman. We don’t seem to have statesmen any more.” Indeed.

These songs are unabashedly sentimental, but they are wonderful, too, and they comforted a lot of separated lovers through more than one war. So, here’s to you, Willie and George. I’ll be seeing you.