The Garden of Evening Mists by Tan Twan Eng
My rating: 5 of 5 stars

This book slayed me. I loved The Gift of Rain which I read first, but The Garden of Evening Mists has surpassed it in my admiration. The story is hard to endure at times, due to its historical context: Malaya during the Japanese invasion, which began on 8 December 1941, just after midnight (thus preceding the attack on Pearl Harbor). It carries us through the experiences of our narrator, Teoh Yun Ling, who was held for three years in a brutal camp, along with her sister, and who is the sole survivor of that camp. As if subjugation and torture from the Japanese weren’t enough to cope with for the tormented people of Malaya, the Chinese Communists insurgency also terrorised them for twelve long years, both during and after the war.

That story on its own would make hard reading, but the fore story is that of Yun Ling as she is now, a woman near seventy and a retired Supreme Court judge, suffering with an incurable illness that affects her memory, who has travelled back to the garden of Yugiri (Evening Mists) in the Cameroon Highlands, where she had once been apprenticed to a Japanese master gardener with the dream of eventually building her own garden as a memorial for her dead sister. The novel thus moves us, gently and with an exquisitely deft touch, backwards and forwards in time, from Yun Ling’s present situation, back to her childhood, and through her life after the war. She tells us of her years with the gardener, Aritomo, who becomes her lover and the only person with whom she shares the story of what happened in that concentration camp.

At its heart, this is a story of a Chinese-Malaysian woman who comes to love a Japanese man, despite the horrors of her experiences at the hands of the Japanese; a man who helps her to heal, as she helps him, even as his particular role in the occupation and subjugation of the Malaysians remains obscured by its own evening mists. It’s rich and complicated, the way these people relate to each other and learn not only to accept but to love one another in spite of everything.

All of the characters are beautifully real; so that I felt completely immersed in their lives and cared deeply about their survival. The book is gracious and subtle and forgiving in a remarkably tender way that I rarely encounter in modern fiction. And the writing is like this:

The temple was a collection of low, drab buildings barnacled to the side of the mountain; I was disappointed, having expected more after the arduous climb. A stream ran past the temple, draining into a narrow gorge. In the sprays steaming over the drop, a small rainbow formed and wavered. Aritomo pointed to the rocks on the opposite bank. They seemed to be trembling. A second later I realised that they were covered with thousands of butterflies. I watched them for a moment, but was impatient to move on.

‘Wait,’ Aritomo said, glancing up at the sky.

The sun hatched out from behind the clouds, transforming the surface of the rocks into a shimmer of turquoise and yellow and red and purple and green, as thought the light had been passed through a prism. The wings of the butterflies twitched and then beat faster. In small clusters they lifted off from the rocks, hanging in the light for a few moments before dispersing into the jungle, like postage stamps scattered by the wind. A handful of the butterflies flew through the rainbow above the gorge, and it seemed to me that they came out looking more vibrant, their wings revived by the colours in that arc formed by light and water.

We walked up to the temple’s entrance. A pair of cloth lanterns, once white, hung from the eaves, like cocoons discarded by silk worms. Blackened by decades of soot and incense smoke, the red calligraphy painted on them had ruptured and bled into the tattered cloth, words turned to wounds.

I had a tiny personal victory whilst reading this book, which I began several months back and then had to set aside for various reasons, having only just completed it last night. In the opening chapters back when I first was reading this, I noticed a small flake of something on the page and moved my hand to see if it would brush off. Just before I touched it, I realised it was a living thing: a larva. I had been reading the book outside earlier and thought it must have dropped onto the page from the maple tree I’d been sitting beneath. It was so delicate that I did not expect it to survive.

Growing a larva into a moth or butterfly sounds simple, and yet they are fragile and have very specific requirements. Many of them will only eat one specific plant. As it turned out, this one liked an heirloom rose we keep in a container on our balcony, so that’s what we nourished it on, keeping it in a habitat we made until it was fully grown into a robust caterpillar. When we ran out of viable leaves, my husband and I walked all over town until we found another rose like ours, outside a public building, from which we pilfered a branch.

I named our guest Aritomo. 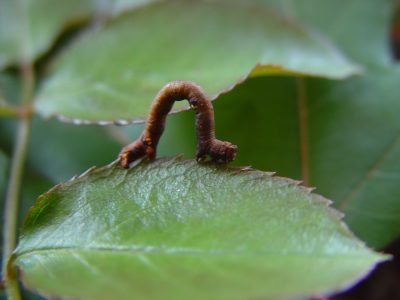 One day, Aritomo stopped eating (which was obvious because up until then, it had been chomping merrily away at the leaves on its branches, which we replaced every couple of days). Then, Aritomo disappeared. I could not figure out how it had managed this as the enclosure was secure netting, surrounding a clay dish which was filled with soil, in which the leafy branch resting upright in a small water pot. I learnt then that some caterpillars bury themselves in soil and stay there until they are ready to emerge as moths. (I was pretty sure by this time that we had a moth.)

We took down the netting and peeked beneath the soil to find that, sure enough, there was a little Aritomo bundle resting beneath it. I removed the branch but put the netting back, then waited for several weeks until one morning when I woke to find a beautiful moth resting inside the net. I waited till dusk to set her free, as that seemed only appropriate. Anyway, it was evening, and maybe even a little misty at the time. In my memory, I like to believe it was. 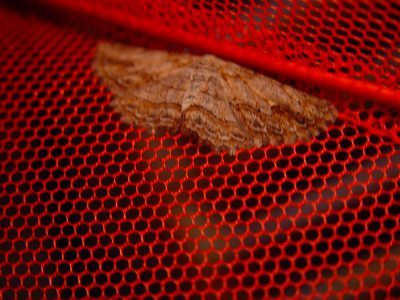