Caraval by Stephanie Garber
My rating: 3 of 5 stars

Note: I read both Caraval and Legendary over the past couple of nights, so this review discusses both novels in a general way. I think I have avoided plot spoilers though and stuck to what I liked and disliked about the books.

Oh my stars! Someone needs to give Garber’s editor a sound thrashing. Why, you ask? Because today I have a hangover from bingeing on buckets of broken stars; mismatched lovers that cling to hope like lost kites over frozen lakes; silver-blue sadnesses that feel like skyfall-peonies rotting in an autumn wind; amber skies smelling of lost dreams and broken promises; betrayal that wreaks of old love letters inked on torn parchment, trembling in the hands of an ancient and weeping monk; whispered dreams shared hurriedly in stinking back alleys; and other strings of syrupy similes and meaningless melodious metaphors.

The Caraval story is not lacking in charm, but Garber has this writing tic that drives me spare. The sky smelled like amber and falling stars, for example. Okay, I made that one up; but all those I have listed here are not unlike what Garber has written on just about every page of both novels in this series. Here’s a quote from Legendary: “The air tasted like wonder. Like candied butterfly wings caught in sugared spiderwebs, and drunken peaches coated in luck.” * It’s a fact too that she simply cannot get enough of stars: stars that are at various times broken, bleeding, crying, watching, planning, and (always and endlessly) falling.

This haphazard whimsy is the kind of thing Catherynne M. Valente carries off almost effortlessly. Yes, it’s purple prose, drastically overwritten, but that’s part of her brilliance and her personal style. It may be purple but Valente’s is a gorgeous hue. She makes it work. I have to add the “almost” though because sometimes I find that I can get exasperated with Valente too. Not all of her books work for me, but I love quite a few of them, and I don’t expect to get a hundred percent hit rate with any writer. Valente has a fantastic mind though. She seems to be super smart and that shows in her writing even if sometimes her verbal acrobatics go over the top. I don’t know of another writer of fantasy who is quite like her in intelligence, humour, and creativity with ideas and language. In summary, I believe Valente to be a solidly good writer who has the command of her craft in hand and her muses at her beck and call, even if occasionally she goes places where I don’t care to follow, or falls under the enchantment of rhythm to the abandonment of all else.

Garber has woven an extended fairy tale in her books that is evocative of Willie Wonka and the Chocolate Factory, in many ways, while lacking the sardonic wit of Dahl. I don’t hold that against her. We can’t all be Dahl, after all. Also, Garber brings romance to the forefront of her stories. Both books start off at a good pace and gallop onward valiantly to the end. They are not boring and are, in fact, good late-night reads for when you are wide-awake at three a.m. and your brain is not up for anything demanding.

But to tolerate reading Garber, you will have to inoculate yourself against the virus of the rampaging similes and metaphors that clog the books, consisting almost exclusively of pretty words strung together randomly, smelling of vapidity and (of course) fallen stars. Why didn’t her editor help her with this? A good editor should have punished her by making her eat buckets of broken stars that taste like dying dreams, whilst quaffing the black ink of the creatively-damned. Perhaps that would have purged her of these tendencies.

I would be more forgiving, but Garber has been published by a major imprint; or, am I just too old to appreciate a writing style that is meant to appeal to thirteen-year-old girls, who think it’s poetry? (Heaven help us.) Caraval is a world in which virtually everything looks, feels, sounds, smells, and tastes like sentimental drivel from the poetry notebook of a tween girl. And I should know because I used to be just such a girl with just such a series of notebooks. I was clever enough to burn them rather than publish them though, so give me some credit.

I did not know these were YA books, actually, until I started reading. I don’t live in the U.S., so I hadn’t heard of them until recently, though I understand they’ve been bestsellers there. I did not see any advertisements about their being YA but I suppose they must be because they definitely read that way. I would peg the series as appropriate for twelve to sixteen-year-old girls but I think older girls may want something gutsier. There’s no actual sex, and all the steamy intimate scenes involve nothing racier than kissing. Having said that, the second book, Legendary, plays with an ongoing erotic theme involving blood rather than sex, which says something about our values as a society: It’s fine to feed a virginal girl your blood to save her life, or to slowly exsanguinate her with a death-kiss, but don’t you dare have sex with her! In short, there’s a lot of blood and death in both books, as with any fairy tale worth its salt.

The two other major complaints I have is that Garber over-explains everything and repeats those explanations so many times that one wonders if she suspects her readers are stupid or have exceedingly poor memories; also, the plots have some major inconsistencies regarding the overlapping real and fantasy worlds. Not all of the resolutions make sense in the end and you just have to accept that. In order to avoid spoiling the plots and subplots, I won’t go into the details of that criticism here. Also, to be fair, I am aware that the finales may not seem lacking to everyone.

So, if all I’ve got are complaints, why did I not only finish the first book but read the second as well? Good question! You win a stardust posy that feels like regret and smells like yesterday’s sorrows! Well, I am a sucker for slipstream novels, where the real and the surreal are woven together throughout the text. Also, I am a sucker for dark fairy tales that come good in the end, and for bespoke worlds that run according to their own rules and rituals, where the cost of everything is high and currency comes in the form of personal, irretrievable sacrifices. Also also, I like sister stories and ones where the heroines triumph in the end, even though they are forever changed by their hardships, both for better and worse. And I enjoy a romance, even a cheesy one, from time to time.

I think Garber writes a well-paced book with characters who suit the piece, even if none of them won me over in a lasting way. She’s created a beguiling world that is reminiscent of the Carnevale di Venezia. I know there are other famous Lentian Carnivals, too, but Garber’s world as she describes it, with its theatrical balconies, lamp-lit streets of old stone, canals with taxi boats, an abiding sense of claustrophobia, and mystery hiding behind every corner, is more like Venice than anywhere else. Also also also, I like games that involve full commitment of heart, mind, and soul, where losing may cost everything the player holds dear, but not playing would mean imminent doom. (I should add that I like these types of games in a fictional sense, as I prefer a calmer, less existentially-rife life myself.)

Because of these elements, I still enjoyed both books even though they are quite seriously in need of a better editor to guide an otherwise strong storyteller. Then again, perhaps I am putting too much on Garber’s no-doubt overworked editor. Maybe it’s impossible to finesse a writer away from the gushing, flowery phrases that glut her text, which might feel to her like the hallmark of her personal style? Hard to say, really. Nevertheless, each book only takes a few hours to read so it’s not a huge investment of time. Garber is worth those hours, if you enjoy this sort of tale. As an added bonus, the covers are gorgeous and since I am basically shallow, that gets me every time.

I will continue to follow this writer’s work because I have faith that she will improve and because there is simply something appealing about the stories she tells. Perhaps they remind me of being that thirteen-year-old with the notebooks full of terrible poetry. Garber’s second book is, in fact, stronger in its plotting and its various levels of intrigue than the first, but her metaphors are still making my teeth itch. I finished Legendary in my sleepless, pre-dawn hours and woke up this morning feeling like sugar-spun cobwebs and ancient dying stars crying hydrogen tears. Probably also like old memories and something to do with really black ink on rain-moistened parchment that smells like heartache and tastes like migraine. 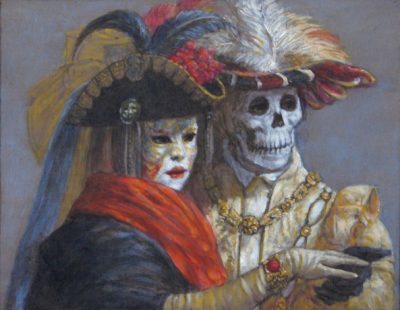 * To be fair, Garber does introduce Scarlet as someone with synesthesia―a person who experiences subjective sensations or images of a sense (as of color) other than the one (as of sound) being stimulated. Judging by her writing, perhaps Garber is synesthetic herself. However, this is only explored in passing and is not woven into the story in a way that makes sense of it, enriches Scarlet’s character, or alters her experiences regarding the challenges she faces. So, it’s kind of random and unevolved as a character trait. Furthermore, the same synesthesic description permeates the second book, whose main character is Donatella, but there is no further mention of synethesia at all. So, we must assume this is more about the author’s writing style than an attribute of a particular character.