Margaret the First by Danielle Dutton
My rating: 4 of 5 stars

Margaret Cavendish, Duchess of Newcastle, is presented here as a vibrant, fascinating, unique, and lovable woman, which I’ve no doubt she was. She was also (perhaps unintentionally) hilarious and egocentric to an astounding degree, but no more so than many men of that or any age. Egocentricity always stands out in a woman of past centuries because it’s so unexpected. One suspects it would not have been tolerated had she not been of noble birth and marriage. Happily, for us, Margaret was protected by the good fortune of both. She is most certainly a shining example of a woman who indefatigably pursued her life’s work and her social, intellectual, and artistic interests, despite the criticism of her peers.

Whilst reading this book, I found myself being constantly grateful to William for standing by Margaret no matter how outrageously (for the time) she behaved. William and Margaret, as presented by Dutton, are a devoted couple who marry for love. They are mutually supportive of one another. William encourages and indulges Margaret’s writing, her autodidactic education, and her whimsical sense of style. Of course, all husbands should do, but I mention this because it was not typical of husbands at the time. William, in this way, was also unique.

Margaret’s fashion choices get a lot of attention in Dutton’s book because they are singularly unforgettable. One evening, Margaret appears at court to meet the new queen in a dress with such a long train that the maid has to stand outside the door holding it, thus Margaret upstages the queen herself. It is a rule that one may not wear a train longer than the Queen’s but Margaret has not remembered this. William takes it in stride and promises to make it all right with the king but, really, the best part of all this is the description of the dress itself: At last they disembark and enter the Banqueting Hall together, William greeting familiar faces, Margaret in diamond earrings and a hat like a fox that froze. . . . in a gown designed to look like the forest floor, like glittering yellow wood moss and starry wood anemone and deep-red Jew’s-ear bloom. It has a train like a river―so long it must be carried by a maid―yet hitches up in front, so she might walk with ease. Gone are the golden shoes with gold shoe-roses, just flat boots laced to her knees. (pps. 136-137) On a related note: I want that outfit―but obviously, the fox hat would have to be fake because I love foxes.

On one occasion, William fails to appreciate Margaret’s choice of dress. She arrives at the theatre wearing a gown that fully exposes her breasts to a crowd attending the performance of a play he’s written. (It also stings that everyone in London assumes that Margaret herself has written the play.) Still, William does not react like a beast, as many men would have done. Here is a description of her costume for that particular evening. (She is always turned out in spectacular fashion!): She has her mask, her gown. The ‘femme forte’ she explained to the seamstress. And so the dress, like an Amazon’s, is all simple drapes and folds. . . . A glass bead in the back of her mouth holds the mask in place. . . . She tries not to gag on the bead. . . . her dress is gold, her breasts bared, her nipples painted red.

The dialogue between William and Margaret, at the end of the play, made me laugh out loud:

. . . but before Margaret can say a thing in all that noise, William has her elbow and is guiding her through the crowd.

“Congratulations!” she tells him once their carriage door is shut.

The horses lurch ahead, crossing the Fleet in the dark.

“Is something amiss?” she asks, placing the mask in her lap.

The river oozes beneath them, a blacker sort of black.

“What could be wrong?”

The driver turns north onto John.

“Only tell me,” he finally says, looking out into the night, “exactly who wears such a gown to an evening at the theater?”

“The ‘femme forte’,” she explains, “a woman dressed in armor.”

“Do you think you are Cleopatra?” he asks.

Margaret bristles. She fingers the mask. “I had rather appear worse in singularity,” she says, “than better in the mode.”

“Do not quote to me from your books,” he snaps. 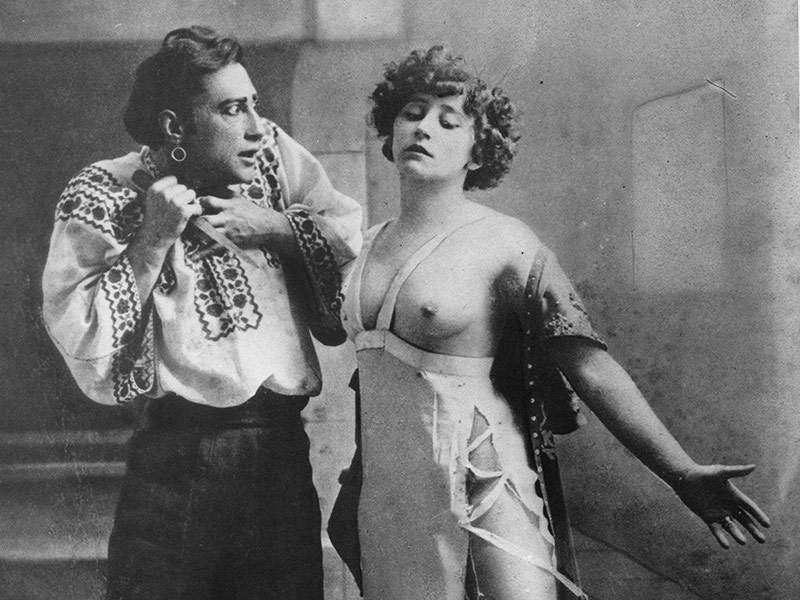 Whilst reading Margaret the First, I was repeatedly reminded of one of my favourite writers, another inspirational woman of history and a legend in her own time, Madame Colette. Though Colette did not involve herself in politics or science, she was certainly a singular sensation and a shining star of the Belle Epoque. Like Margaret, Colette was an intellectual, an autodidact, and an egocentric who challenged the cultural mores of her time; even amongst Parisians during the decadent Belle Epoque, she knew how to cause a stir. She was outrageous and unpredictable, charming and loveable. I thought of Colette’s costume in La Chair (above) when I read about Margaret’s breast-revealing la femme forte gown. Colette was an unrepentant sensualist and a bon vivant of epic proportions who loved to shock and delight a crowd, but it is significant that she came two hundred years after Margaret and, for her time, was no doubt less radical than Mad Madge. Margaret bared both breasts to the public,* without the protection of an acting role and a stage to play upon. She wrote books when women did not write. She thought and spoke at length about politics, philosophy, and science, and made gifts of her own books at a time when women of the nobility were meant to give birth to male heirs, refill tea cups, and then sit quietly sewing in the corner.

This book was not my introduction to Margaret. About a decade ago, I tried to read The Blazing World and Other Writings, drawn in by both the title and what I knew of its author. Alas, I could not get through it. I love Mad Madge as an historical personage of distinction and flair, and I love her ideas. It is so disappointing to me to find them poorly executed and monotonous to read. The book began to feel like a chore to be completed rather than a pleasure to indulge in.

Dutton is a beautiful and subtle writer who does great honour to this inspiring woman. I often think that novels can tell the truth better than biographies, and certainly better than autobiographies. Of course, whether Dutton has captured the essential nature of Margaret and the life she led, we can never know for certain. I like to think she has because it is a beautiful homage she has written, even if it is fiction. Margaret herself lived her life more in her mind than anywhere else, and Dutton certainly captured that about her. You will not find this book a chore at all.

Note: Besides the woodland gown with the faux-fox hat, I now need some stars to paste on my cheeks too.

* Regarding the baring of breasts: It is true that, throughout history, some noble women have been painted or sculpted with one or both breasts bared. Saints, of course, were often depicted in this manner but those were mythic paintings, not portraiture. The baring of breasts was rarer, but not unheard of, in the peerage of England during the Restoration. It is also true that Margaret was not the first female public breast-barer who did it for reasons of personal aesthetics rather than political protest (i.e. Lady Godiva), but I’ve no doubt that she was also making a social point about women being individuals and persons in their own right. Nevertheless, the trendsetter Agnès Sorel beat Margaret by two hundred years: In 1450, Agnès Sorel, mistress to Charles VII of France, is credited with starting a fashion when she wore deep low square décolleté gowns with fully bared breasts in the French court. Other aristocratic women of the time who were painted with breasts exposed included Simonetta Vespucci, whose portrait with exposed breasts was painted by Piero di Cosimo in c.1480. See décolleté 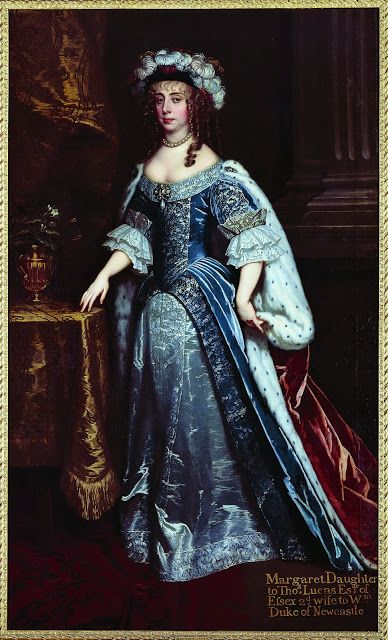