Book Review: A Strangeness in My Mind, by Orhan Pamuk

A Strangeness in My Mind by Orhan Pamuk
My rating: 5 of 5 stars

“I can only meditate when I am walking. When I stop, I cease to think; my mind works only with my legs.” Jean-Jacques Rousseau

This book is long and meandering, its power like that of a fire built slowly from a bit of kindling and a single spark. From the beginning, it is carefully tended and coaxed along in a quiet but steady fashion until Whoosh!, it ignites in full glory.

A Strangeness in My Mind did not particularly grab me, in a dramatic sense, with its opening but it did interest me enough to keep going. It begins with the protagonist, Mevlut, a boza seller, and his fiancee, Rayiha, running away to elope. I liked Melvut and Rayiha, so I kept reading, all the while thinking that, yes, it is good; I am not loving it, but neither do I want to abandon it. We follow Mevlut’s life from the time he is a boy of twelve until he is a man of fifty-five. The narrative structure is mostly linear, though there is a bit of slipping back and forth in time. There are a lot of characters in this book but I did not find them hard to keep track of. However, should you get lost, the author has provided a family tree at the beginning of the book and a character index and chronology at the end.

I felt bogged down in the years when Mevlut was an adolescent living alone with his father on the outskirts of the city, failing at his all-boys school, working as a street vendor, semi-stalking women he was obsessed with, and masturbating nonstop. Then, when Mevlut enters his mandatory military service, the book remains very male-focused, dominated by their interests, their dialogue, and their competitive struggles. Basically, these pages wreak of testosterone and musky sweat. As a woman reader, this bored me, I have to admit. I read a lot of books written by men, but I like the women and girls to be involved or I simply can’t connect. *

Having said that, I did love wandering with Mevlut through Istanbul and hearing about the changes the city was undergoing over the years. And what happened over the course of the narrative is that my sense of intimacy with Mevlut and with Istanbul grew closer, insidiously, so that by the end I was shedding tears and felt a deep sympathy with him. Mevlut is within the city but the city is also within Mevlut. It is also a dynamic symbol of the tumultuous lives of impoverished Turkish families. Their fates and sorrows are intertwined.

So this is how Mevlut came to understand the truth that a part of him had known all along: walking around the city at night made him feel as if he were wandering around in his own head. That was why whenever he spoke to the walls, advertisements, shadows, and strange and mysterious shapes he couldn’t see in the night, he always felt as if he were talking to himself. (p. 579)

I cannot escape my impression that, if one were to put a gender to Istabul, it would be a woman: a grand and beautiful dowager who has been roughly treated but maintains her dignity and grace nevertheless. This is how the women in the book are presented, too. Though not all are roughly treated, they all have difficult lives, made all the more difficult by living in an oppressive patriarchy and struggling at various time with grinding poverty and lack of proper reproductive healthcare. In this way, I came to feel that Mevlut loved three women deeply and passionately during his lifetime: first, his crush, Samiha; then, his wife, Rayiha; and, from the age of twelive, his adopted city, Istanbul.

But just like believing in God, falling in love is such a sacred feeling that it leaves you with no room for any other passions.

By about halfway through A Strangeness… had hooked me. I realised how completely invested I had become in the characters’ well-being. I had not felt terribly attached to Melvut before then and, really, it was the women becoming more of a presence in the book that made it take off for me (Melvut’s wife, Rayiha, their daughters, and Rayiha’s sisters). Over six hundred pages, I fell in love with Melvut, Rayiha, their girls, the girls’ aunties, and the rampaged and rambling sprawl of old Istanbul. These are very ordinary people, with ordinary lives, but the story of these lives is rich and proves the point that no one’s story is boring if you attend closely enough to the telling. Pamuk is masterful in the telling, but it’s a subtle mastery. He does not bash you over the head with bigness. The dramas, while intense and worrying, are not over-played. There are deaths, even one murder, but the details given are only enough to tell us that these things happened. Nothing gratuitous. I appreciate Pamuk’s discretion and feel that his choices of when to zoom in and out of focus are near perfect.

I am reflecting on the aftertaste of A Strangeness in My Mind, thinking that it’s probably a lot like boza: nostalgic, sweet, and just a bit sour, all at the same time.

“I’m a Muslim,” said Suleyman. “Only things that obey the rules of my faith can be holy.”

“Just because something isn’t strictly Islamic doesn’t mean it can’t be holy. Old things we’ve inherited from our ancestors can be holy, too,” said Mevlut. “When I’m out at night on the gloomy, empty streets, I sometimes come across a mossy old wall. A wonderful joy rises up inside me. I walk into the cemetery, and even though I can’t read the Arabic script on the gravestones, I still feel as good as I would if I’d prayed.” (p. 271)

Two desires that will linger with me now are to wander aimlessly through the nighttime streets of Istanbul and to try boza for myself. Pamuk is a beautiful writer. I am looking forward to more of his books.

* Note: For this reason, although I enjoy fantasy, I did not enjoy The Lord of the Rings, in which females are icons on pedestals rather than playing an active role, or Moby-Dick or, The Whale, or Das Boot, in which females have no place at all. I did like watching the films of Lord of the Rings though because they were spectacularly made. I was swept away by the awesome visuals. 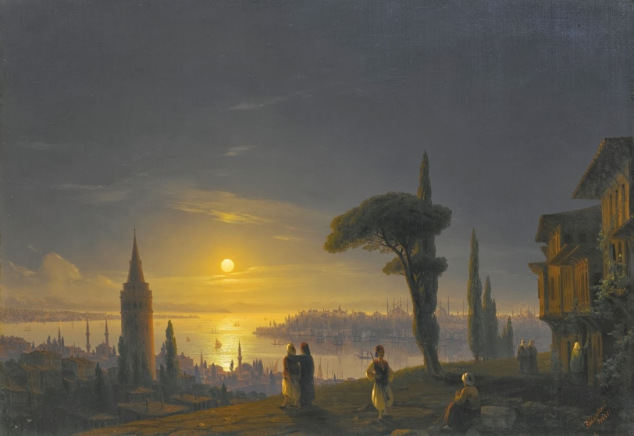 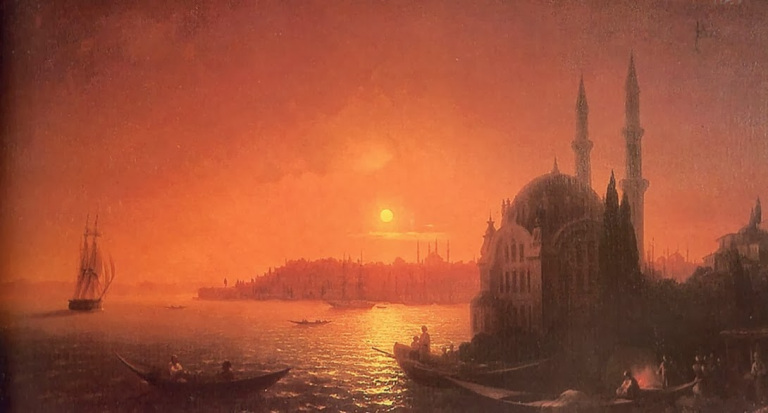