Book Review: The Girl of Ink and Stars, by Kiran Millwood Hargrave

The Girl of Ink and Stars by Kiran Millwood Hargrave
My rating: 4 of 5 stars

I have three young nieces who love reading and being read to, so they get quite a lot of books from my husband and me. But I like to read them first and, if they are suitable, buy fresh copies for the children. The nieces enjoy stories about spunky and capable girls with bright minds and big dreams, and this one seemed to tick all the boxes.

So I began this book a few weeks ago but then got distracted with other things I was reading. I picked it up again two days ago and found that I could not reconnect with the story. I started to pitch it into my “DNF” stack. But, no. . . . Something was bothering me about that. I felt I was being unfair. I thought that perhaps I had not been in the right frame of mind to began reading it when I did, as I had just completed book three of Catherynne M. Valente’s The Fairyland Series and some other (adult) books. I decided to begin again and consider The Girl of Ink and Stars in its own right.

I read it straight through in a few hours last night and very much enjoyed it. I think it’s an especially good read for the age group at which it is aimed (middle readers), and I know that I would have adored it back then. Here’s what I found beautiful about it. Firstly, it is gorgeously presented, and I liked everything about this design and presentation. You can see the cover but not the inside, which has maps printed on the inside front and back covers, and cartography bits and pieces lightly printed on each page of text. Secondly, the story is told with simple but elegant language and with compelling characters. Thirdly, the three main characters: Isabella and Lupe, who are thirteen, and Pablo, who’s a bit older, are intense and earnest and take themselves and their challenges very seriously. I like this especially because the book is not funny at all. Not that I don’t like funny books, in their place, but I find it tiresome when books for kids (or adults) deliver lines as if we were reading a script for an American sit-com. Too much sarcasm and snappy one-liners become tedious, annoying, and unfunny very quickly. (This is also a trend in urban fantasy and other genres.) Fourthly, and what I especially appreciated about The Girl of Ink and Stars, the two girls are genuinely left, on their own, to resolve the crisis that threatens to destroy their island home. It is an overwhelming and impossible task, yet they face it nobly and with great character, despite great personal sacrifice.

I think Hargrave uses the island myth to great effect and is consistent and steady with her modern (within the book’s context which has a 19th-century feel) parallels and revelations. She describes things perfectly, as one might expect from a poet, without overdoing the language, giving the reader just enough detail to share her vision. Many times, this vision becomes horrific, and we can feel the terror that Isabella and Lupe and Pablo must feel, but never is it graphically spelled out in grotesque detail. I find this blend of talent with restraint rare these days when so much in books and films is overdone so that absolutely nothing is left to the audience’s imagination.

I would recommend this book to anyone who enjoys reading myths, fairy tales, and folklore, or books about girls who are steadfast and loyal friends saving their world together. (And who doesn’t love that?)

Extra notes for true book geeks: The mapping coordinates of the fictional Isle of Joya are given on the opening page of the book, so of course I went to Find Latitude and Longitude and looked them up! Hargrave has based her tale on La Gomera in the Canary Islands, Spain. This is the very port from which Christopher Columbus set sail on 6th September 1492, intending to sail to the Indies under the patronage of Queen Isabella. Water from La Gomera was taken to “baptise” the new continent. No doubt alluding to these historical facts, in The Girl of Ink and Stars, Isabella’s father, called Da, is a brilliant cartographer who teaches his daughter all he knows of both legends and map-making, and who yearns to see Amrica. 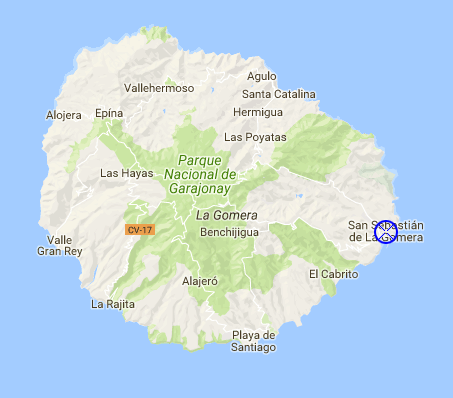 Although it has these real-world overlaps, Hargrave’s Isle of Joya, legend has it, floats! More than simply floating like a scoop of ice cream in a Coke float, though, it travels the globe as its own organic, self-directed, and self-maintained ship. When the story opens, however, the island is held fast to its underwater plates (or by a fire demon – same/same) and the songbirds have long fled. The islanders’ geographical seclusion makes cartography a wild romantic ideal rather than a bonafide profession, especially since the citizens of Gomera are not even allowed to travel across their own lands but must stay put by the coast. Obviously, this presents a challenge for anyone with wanderlust. Some of the other places names mentioned are Amrica, Afrik and India which adds mystique to places that we readers would normally think of as just ordinary parts of our world.