Book Review: From the Wreck, by Jane Rawson

From the Wreck by Jane Rawson
My rating: 5 of 5 stars

I am starting a new bookshelf for Jane Rawson. I had never read her until now, and I just love this book to bits. From the Wreck weaves a tale based in a completely believable “real-world” Port Adelaide of the 1850s, but the net is shot through with luminous (or, rather, bioluminescent) threads of magic. The book keeps us floating in a sense of timeless wonder, drifting back and forth between the hard reality of life on land with the “boot stompers” and the beautiful world that simmers and shimmers beneath the ocean’s waves.

Rawson’s characters are immediately engaging and memorable. I especially appreciate that she avoids the common themes of so much Aussie fiction I have read, where every family is miserable, domestic violence is rife, everyone is marked by trauma, and there is no such thing as a happy or hopeful ending. Rawson treats her characters with compassion and allows them the chance for a good life. Even while they may not always behave admirably, we can understand that they are doing the best they can in very trying circumstances, with their own limited understanding of their situation.

My favourite parts of the book are the passages where the reader is allowed inside the alien/octopus’ mind or inside Henry’s or George’s mind when they are seeing life through her eyes. These scenes are written with a light touch but a deep poetic serenity that is breathtaking:

. . . All of it, life.
The great joyous throb of it.
He plunged into the swarming ocean, felt its wriggling abundance. Slumped and lay soft on the currents of it, drifting. Henry sounded the ancient depths of his Mark ―like this today and yesterday and tomorrow and always. No shadows fell, no teeth snapped and there was a stillness amid the frenzy. Henry felt his place in it ― just to be this boy and never wonder why or who or how to be better, braver, otherwise. Just to be and to love. To notice it fresh every day.

Rawson is also funny, and From the Wreck is compulsively readable. Once I got going, I had difficulty putting it down to do other things (always a reader’s dilemma, but some books make it more of a struggle than others). Here is an example of Rawson’s humour. The alien creature, a giant blue octopus, has morphed herself into the shape of a woman so that she can once again confront her first human companion, George, whom she met and bonded deeply with when he was stranded at sea after the shipwreck. She hopes to set George straight, since he is rollicking around acting like an insane idiot believing that she has somehow cursed him and his boy, Henry. In fact, our shape-shifting cephalopod is not evil and is Henry’s closest companion and most intimate friend. George seeks to sever that bond in a dangerous and potentially fatal way.

So, the alien, who calls herself Bridget when embodied as a woman, is sitting at a bar in a pub, trying to make small talk to get George’s attention. She is unused to being in woman form these days. She is unused to speaking to others. She has never been in a pub and, trying to be like the locals, orders beer for the first time. After spewing the beer everywhere, here’s what she says to the woman sitting next to her:

“It’s a bundle of mysteries, isn’t it, this world? . . . Always something else. Horses. Sandwiches ― have you tried those? Walking on two feet. Leather ― it’s made out of the skin of other living creatures, I found out. Singing, and sometimes everyone knows the song and they all sing too. You can take the fat from a whale and put a flame to it and then you have a light to read. Or sew ― that’s a thing people do. Well. And now beer.”

The beauty of the book, besides the characters, the eulogies of the octopus for her lost home and its people, and the elegant and luminous prose throughout, lies also in its themes: that we humans are easily frightened and fragile creatures who cling desperately to what we know and fear anything strange or different from ourselves; that we might live larger, freer, and much more wondrous and beautiful lives if we opened our hearts and minds to the great unknown, and told our fear to shut up now and then; that we, all of us, are a part of this net of life that spreads out to catch not only our planet, but the universe entire; that we all get lonely and need others, even if human need expresses itself differently from other life forms.

It’s really a gorgeous, enchanting read and I would encourage you to pick it up yourself. The cover is beautiful, too, though I did wish the back had pictured Bridget in octopus form. But that’s just me, being a cephalopod lover. I’ll finish with my favourite quote, whereby George is getting a telling-off by the octopus:

“You didn’t understand anything, George, . . . Why were you so angry? You lived, you fool! You got to have a whole wonderful life on a beautiful world and all you could do was rage against it. I should pull you under these pitiful waves and let you drown in three inches of water. You mean nothing ― nothing. None of anything that happened on that ship meant anything at all. You’re a speck, a tiny speck in time, in space. Nothing. Look.”

And then the voice showed him a story.

On a planet, all ocean, there was a small, happy person living small and happy and quiet in her own small niche, her own small place, her own quiet space. Born, grew, ate, grew, lived, loved, ate. The sun, that star, shining on her one happy face. 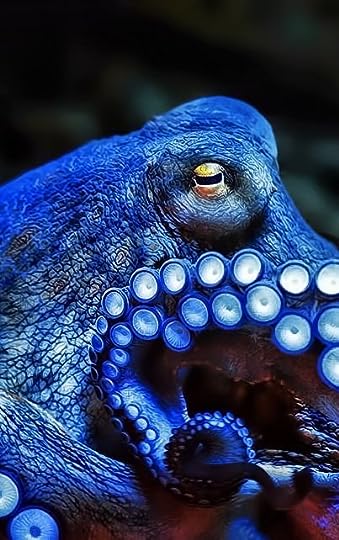