Religion for Atheists: A Non-Believer’s Guide to the Uses of Religion by Alain de Botton
My rating: 4 of 5 stars

There are many things to like about Botton’s book, for both religious and irreligious readers. He has a beautiful way of noticing and explaining the value of religion, and why it is a great loss to humanity to toss out the wisdom and traditions of the Church, along with beliefs in the Divine. His argument is that one need not embrace the supernatural in order to benefit from what religion has offered human beings over many centuries: a life of unified purpose, a sense of community, a focus on others that distracts us from our natural egocentricity, an idea of love that is more than just self-satisfaction, a system of ethics, meaningful rituals to mark the passage of time, gratitude, artistic beauty and grandeur, comfort in our suffering, and a healthy pessimism about humanity and life on Earth that (paradoxically) gives rise to joy in unexpected pleasures.

Botton focuses strongly on the Catholic Church, to good effect, in my opinion, due to its long history of impacting Western culture at every level: educationally, politically, psychologically, spiritually, aesthetically, etc. Botton goes chapter by chapter, offering an analysis of what he thinks secular humans could borrow from religious institutions and traditions, and why he thinks that it is necessary to do so. As with the pull towards religion, though, one must believe that something is missing in order to go searching for it. Botton believes that something is indeed missing, at humanity’s soul level.

I was a bit confused by this, as he is an atheist who repeatedly refers to the soul, without explaining what he means by the term. I came to feel, whilst reading, that by soul, he means the same thing, essentially, that spiritual people mean: the intangible yet vital core of “self” that is located within, but is not the same as, our physical bodies. And yet, since he holds no belief in immortality, how would he differentiate that from “mind”? I am not sure. Most believers in souls would say that souls are transcendent and can exist outside the body. Botton clearly does not believe in any kind of life of the soul outside the body, or outside this one human lifetime he believes us to have.

He offers up a post-Enlightenment vision of what a secular humanist approach to religion might look like: art museums that are organised, not in dry categories based on historical and geographical origin, but in ways which promote and encourage our identification with art, and which are most likely to produce emotional exultation. So, the Metropolitan Museum, or the Louvre, would have halls of Contemplation, halls of Suffering, halls of Joy to Childhood, or similar. Modern architecture, too, would be less dreadful, and we would take seriously the evidence that how a city — or a school, or an office, or a home — is designed and structured can have a profound impact on the mental and physical health of its inhabitants.

Botton writes intelligently and well, and his arguments are sound. And yet, I could not help but feel, at the end of it all, that his vision contains a profound blind spot: what religion really offers, to its believers, is God, and that the belief in the Divine is the heart and soul of the thing that makes everything else possible (the comfort, the joy, etc.). Remove God from the Church, and we are left with nothing but an exquisite corpse. If He was never there to begin with, then we are left standing alone in what may be a beautiful building, but is certainly not a sacred* space.

While I agree that many things could be improved by implementing some of Botton’s ideas, most especially regarding considerations of the impact of bad architecture and planning on human lives, and regarding the provision of secular but lovely spaces for quiet reflection, the final chapter of his book left me believing that his theory, if fully realised, would be doomed to fail. Based on the ideas of Auguste Comte, a French philosopher who advocated fruitlessly during his lifetime for a Church of Humanity, Botton suggests the building of institutions which honour humankind’s hopes, sufferings, and achievements. The idea is that these would be churches stripped of religious sacrament but borrowing from religious liturgical rituals. Others who came after Comte were influenced by his ideas, and two such churches were eventually erected.

These churches are called “positivist” because, presumably, their members believed/believe in the Enlightenment idea of continual human progress towards the goal of perfecting the species, the world, and what-have-you. That idea in itself, to me, is so naive and fanciful as to beggar belief. By now, it would seem obvious that we do not, as a species, continue to improve, however much we have achieved (and continue to achieve) technologically and scientifically. I say this not as a pessimist but as a lover of humankind and the world, yet one who sees — as many do — that we are forever going to be flawed creatures behaving in the way that flawed creatures behave. We are beautiful and ugly, loving and hateful, courageous and cowardly, intelligent and stupid — a bag of mixed nuts.

Botton’s idea of building churches and other secular institutions as a kind of shrine to humanity, where we might go (in essence) to worship ourselves, seems to me to be a fatal flaw in his book. Besides, we have New Age thought for that, which is nothing if not a perpetual gazing at and adoration of the Self, whereby we try to convince ourselves that we are little gods and goddesses, whilst swallowing whole the worm in the heart of the apple.

I see and appreciate that Botton’s intentions are good; nevertheless, the end result when one constructs a religion in which the only beings deemed worthy of worship are ourselves is that we are left right back where we started: restless souls, hollow at our core, who know that it is not ourselves for which we long, but for some being greater than ourselves, more loving and forgiving and wise, who will embrace us with an ineffable love and grace that eludes us here on Earth. Declaring that God is either dead or non-existent does nothing to address that yearning, and I am not convinced by Botton that it is possible to fulfill human spiritual needs with non-spiritual resources. Perhaps some people do not have such yearnings or needs, but then I suppose that anyone reading this particular book might at least be grappling with the feeling that something is missing, in ourselves and in the world, and that the fault is unlikely to be in our stars.

I’ll end with one of my own favourite pieces of secular art, l’Implorante from Camille Claudel’s L’Age mûr, which is palpable in its effect. It’s one of the most powerful depictions of longing I know. 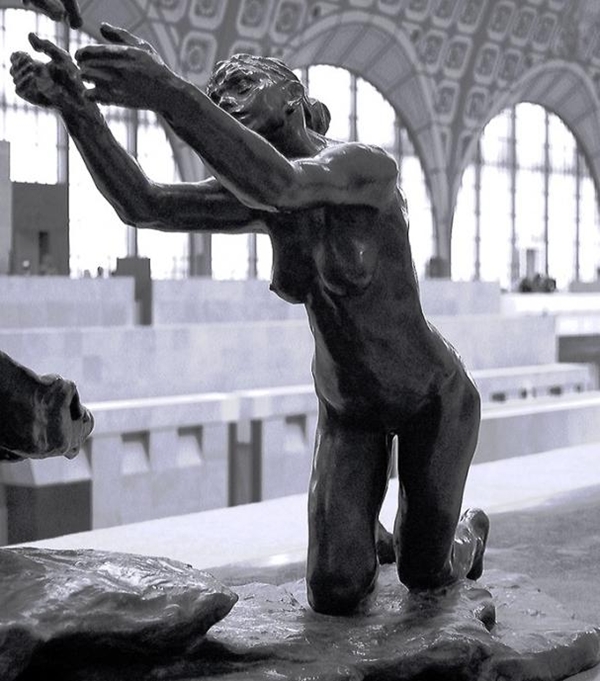 * Where “sacred” means: 1. Dedicated to or set apart for the worship of a deity. 2. Worthy of religious veneration: the sacred teachings of the Buddha. 3. Made or declared holy: sacred bread and wine.