Not all of us escaped 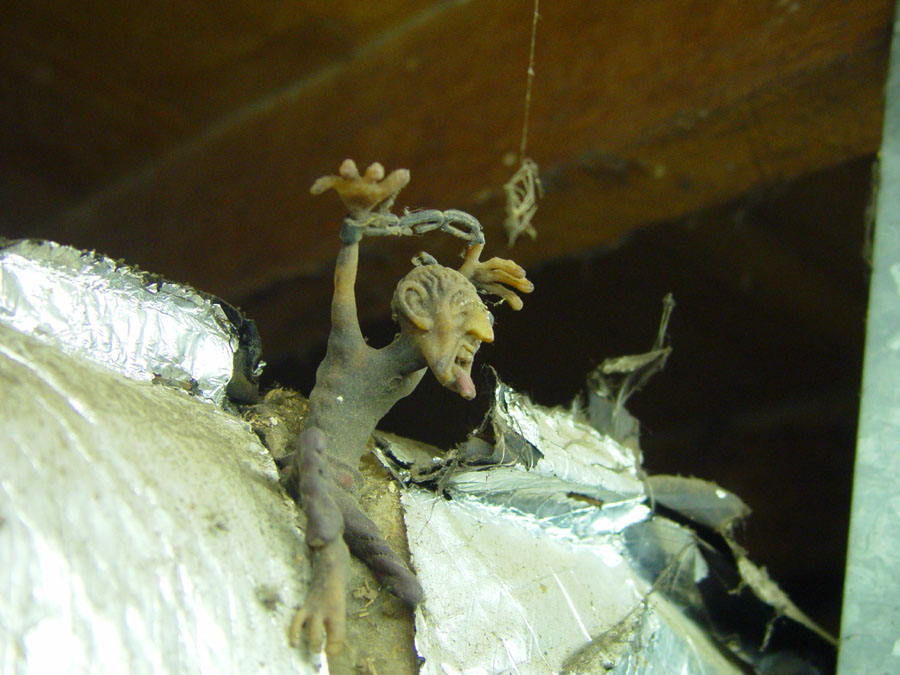 There was this one tiny fellow who stayed behind to mind the place.

Robin and I (td) have just moved house, as Sandra has mentioned. We’d lived in our last place for eight years, and thought we knew every inch of it. We called our two downstairs rooms The Sunroom and The Dungeon: one flooded daily with morning light, and the other half-submerged and having a creepy under-the-stairs space, where daddy-long-legs gathered for nefarious purposes. Additionally, we had a workroom under the house, tucked into a corner of the carport, entered through a locked door with a bonafide skeleton key — a place to keep our bikes and our house-and-garden tools. Robin made and repaired things down there, and I mostly avoided entering it. This was the real dungeon, we know now — a kind of mini Bastille, in our very own home.

This room was half dirt, half brick, and all dust and cobwebs. A filthy light globe dangled from the ceiling.  It was whilst cleaning out this last of our rooms that Robin found, tucked into the crumbling brick wall and stuffed up against some insulation, the little prisoner who’d apparently been our guest all these years, unbeknownst to us. We dragged him into the sunlight to have a good look at him, but he didn’t seem any happier for it, so we put him back in his nook and left him there, to keep his vigil. We are sure this is for the best, as the spiders might miss him if we took him now. He’s practically family.

not to worry, not to stumble

So td and I have been busy with unwriterly things on our respective continents. The past weeks have been filled with managing life, as is sometimes necessary.

td and Robin have been packing up house (and office and business) and moving from the city to a smallish town about two hours outside of Melbourne. I’ll leave it to her to fill us in on the details, but it has been quite a lot of work what with the packing and cleaning house 1 and cleaning house 2 and unpacking.

I’ve been playing nursemaid and companion to my mom several days each week. Just a few weeks shy of her 75th birthday, she took a tumble up the back steps (because that’s how we do things), breaking her left wrist and left knee cap. Both required surgery and are in immobilizing splints. Needless to say, she isn’t going anywhere or doing much of anything for herself. Before her fall, Mom, my sister, and I had planned a couple of road trips for May and then Mom was supposed to come spend a few days with me.

Some people will go to extraordinary lengths to avoid family vacations.

Having experienced a few family vacations, I may file that tip away for future use.

The good news is that td and I are excited about our new piece of fiction, which we are working on in tandem. It may be different from our other stories, but then again many of our other stories are different from each other. The story begins with two best friends on a road trip through the desert. If there are no other interruptions from life, the universe, or the like we plan to have it done and out this summer.

And we should be here more regularly!