13 Ways: What the Elephant Tree Knew 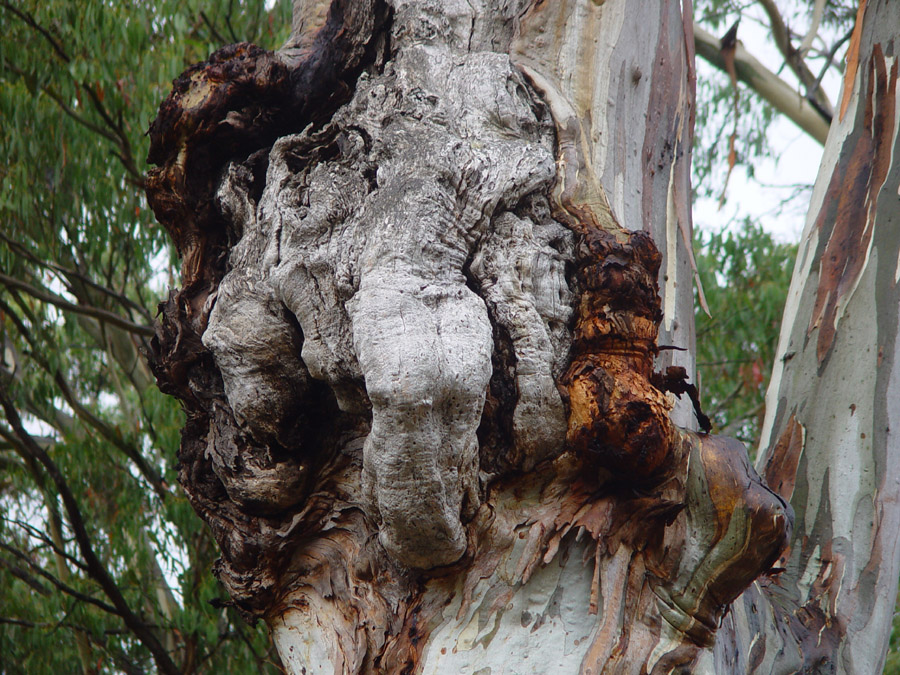 When Lila and Bat were eight and four years old, respectively, they believed that the elephant tree could hear them. More importantly, they believed that she understood them. Every day and in all kinds of weather, the two girls would run to the bushland near their home, laughing in relief to see that their tree was still there. They were young, but they understood about trees: how one could grow tall and strong for a hundred years or more, only to be killed off in a second by a lightning strike, or killed off more slowly from fatal ring-barking. Lila and Bat relied on the elephant tree, as they relied on each other. She was the best listener they knew. She was their friend. She never answered back, but the girls remained hopeful that one day she might.

By the time they were twelve and eight years old, they stopped expecting the elephant tree to voice her wisdom, but still appreciated her quiet and attentive presence, all the same. They continued sharing all of the important information of their lives, beneath her protective gaze.

It was Lila’s sixteenth birthday that marked the turning point in the sisters’ relationship with each other, and so with the elephant tree; or, that’s how it felt to Bat. What happened was that Lila lost interest, first in Bat, and then in the tree. It had been coming on, over several months, Bat realised now. The first hint of a change had been when Lila, out of the blue, had started calling her by her full name, instead of by the nickname Lila herself had assigned Bat when she was born. The second hint had been the new group of girls from school, who took up most of Lila’s waking hours. The third hint had arrived in the form of Bix, whom Bat hated, and who took up all the remaining hours of Lila’s busy life, leaving no time at all for Bat and the elephant tree.

But the final blow had come when Bat asked Lila what she would like to do to celebrate her sixteenth birthday, and Lila had answered that she was going out with her friends. Like everything else Lila said these days, her next statement had been delivered as though it were an Unarguable Fact: “Bettina, no one my age hangs out with her little sister all the time, right? You need to make some friends yourself. Us being together all the time, it’s just not on, you know?” Bat didn’t know. Lila and the elephant tree were her friends.

So, having been dismissed by Lila for what felt like maybe the rest of their lives, Bat stayed away from the elephant tree for a few days. It made her sad now, and she was a little ashamed that the tree might know that her older sister no longer wanted her. Eventually, though, she recognised another Unarguable Fact: the elephant tree was the only friend she had left to talk to, and it was unlikely to drop in at her house for a sleep-over.

Bat prepared herself to make the solo journey, filling her backpack as if she were embarking on a major expedition: a couple of books, a blanket, a bottle of water, a cheese-and-tomato sandwich her mum had made, and a generous slice of the strawberry-sponge birthday cake she herself had baked for Lila, which Lila had refused to eat because she was dieting. It was an easy fifteen-minute walk to the elephant tree, but it took Bat a little longer than usual because of the heavy pack.

Maybe she would have heard them before she saw them, if she’d not been wearing her headphones. And maybe, Bat thought, they’d have heard her, too,  if it weren’t for the huge explosion that seemed to go off inside Lila and Bix whenever they got near each other — apparently so loud that it deafened them to the rest of the world. Bat took off her headphones and crouched low behind an acacia bush, where she could watch them from what she thought would be a safe distance.

Bat and Lila had shared a bedroom as children, and many bath times. They’d never been shy about stripping off their clothes in front of each other, until Lila turned thirteen. Then, she’d moved to her own room, and started demanding privacy in the bathroom. Bat realised now how long it had been since they’d swum naked in the river together. So long that she no longer recognised the body of the sister she’d known all her life. In fact, she no longer recognised anything about Lila, who’d once been as familiar to her as her own self.

She had never seen her sister like this, sprawling naked amidst bracken and eucalyptus leaves, with sunlight dappling her skin and her long hair tangled in sticks. Bat knew about sex, even though she’d never seen it happening like this, right before her eyes, to her own sister. She hadn’t expected it to be so feral. The throaty animal sounds sent shivers up Bat’s spine. She removed her pack and shoved it under the bush, before zipping her jacket up high over her own throat and adjusting her kneeling position so that her spine was ramrod-straight, as if over-correcting for her sister’s abandonment of clothes and posture.

“That’s Lila — my Lila — doing that, ” she thought. And she thought, too, with something approaching awe, that Lila had become both beautiful and terrifying — a stranger to her now, who’d taken a one-way trip to Adult Land, leaving Bat to wander alone through the forest of their childhood. Then, she remembered that the boy whose body was hovering over Lila’s, touching Lila everywhere there was to touch, was Bix, and that was when she thought she might throw up.

Instead, without thinking much about why, she picked up the closest rock she could find and clutched it tight to her chest, taking a few deep breaths — in and out, in and out — until she felt calmer and less vomit-prone. The rock was solid, real, and unchanging in her hands. Bat figured she could leave the rock right where she’d found it and come back in a year, and it would still be there, exactly the same as it was now. Maybe more forest litter would have fallen on it but that was all, unless a fire burned through; but even then, it couldn’t erase the rock. Not completely.

Bat liked rocks. She had a large and varied collection of them back home, laid out on shelves in her room. She considered putting this one to work, hurling it at Bix’s bum as it rose in the air like two little moons rising and setting. Instead, she put the rock back in its bed beneath the acacia, popped on her headphones, and closed her eyes, shutting out the world.

Bat waited half an hour at least before looking again, and by then Lila and Bix were gone. Bix worked on Saturday evenings, so she’d figured they couldn’t stay too long, and she’d been right. She grabbed her pack and stood up so that her head rose above the acacia, and it was only then that Bat noticed what she’d overlooked before: the elephant tree’s realm. She’d been so startled to run across Lila and Bix as she’d trekked across the forest, that she’d failed to take in the familiar setting. Lila had brought Bix to their own secret sister-place, their private holy-of-holies, and had had raucous beast-sex with him beneath the elephant tree. And the tree had watched, silently, just as Bat had watched, silently. Bat wondered if the elephant tree felt as freaked-out and dirty as she did, and whether the tree had thought about dropping a limb on Bix’s bum-moons, as they’d risen and set over Lila.

How could she bring him here? And how could Bat not have noticed until now? She wondered. But then, she knew how. As she took in her surroundings with a fresh eye, it occurred to her that the whole area looked different from this angle, in this particular afternoon light. Sure, that must be it, right?  Or, would it always look different to her from now on? A stranger, like Lila.

She needed her elephant tree more than ever, and could not allow it to be a stranger. So she approached as she always did, walking right up to it and dropping her pack at its base before gazing into the wise old face of the elephant she’d known all her life — or, at least since she could remember her life. She felt she should say something, to avoid the kind of awkward silence that sometimes cripples you when something embarrassing happens.

“I am sorry you had to see that — and hear it. I hope you can forget, but I guess elephants never do, huh? I sure won’t forget.” Bat plopped down onto the shredded bark and leaf litter that served as a seat for her picnic, not caring about her blanket any more. She decided to forget the sandwich, too, and just eat cake. It was a cake kind of afternoon.

As Bat stuffed bite after bite of Lila-spurned birthday cake into her mouth, she leaned on the elephant tree and thought things over. Eventually, nearing the end of her slice, she decided she was okay. It kind of sucked, in one way — in that losing-your-big-sister-to-a-guy-with-a-dog-name way, but it was okay, too, because she was learning things — important things that a person needed to know when they were growing up, but that people couldn’t necessarily explain to you. You had to be there, see it yourself, and feel it yourself. She stretched her arm around to pet the trunk of her tree with her palm, appreciating once again how the ripples on the smooth trunk, where the bark had been shed, could feel like a real elephant, if you closed your eyes and used your imagination a little — well, and maybe if you’d never felt a real elephant. Bat wasn’t sure, since this was the closest she’d ever come to touching one. Still, it was a real enough elephant for her, while still maintaining its vital tree-ness. It had integrity, Bat thought. She’d never used the word before, but it was one her mother used often, and Bat thought she understood what it meant when she looked at her tree.

She thought, too, that maybe she understood now why some of the crazy ring-barkers and fire-starters murdered trees.

“Wise old friend,” Bat knelt down and whispered close to its trunk, “you know everybody’s secrets. And maybe one day, you’ll start talking.”