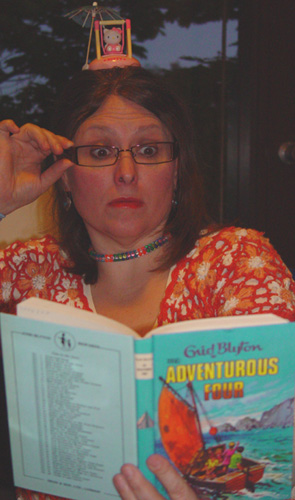 Now that the year is three-quarters done, I have only just learnt about the Australian Women Writers website and its AWW 2013 Challenge, which involves selecting a quantity of books written by Australian women, to read and (optionally) review by year’s end. If, like me, you are arriving late to this solo party, there is still time to mix yourself a drink and curl up on the couch with a good book. Also, you needn’t be Australian — or a woman — to participate.

I have signed up for the “Miles” level, named after Miles Franklin, one of Australia’s most highly-acclaimed women writers. Aside: If you’ve never read My Brilliant Career, you can download it free on Project Gutenberg: link. In 1979, Gillian Anderson directed a film based on the book, which starred Judy Davis and Sam Neill. I haven’t seen it in years, but I remember loving it when I watched it in the ’80s.

So, from now through December, I will be reading a minimum of six books by Australian women, and I will review at least four of those. Reviewing is an optional commitment in the AWWC, but I like reviewing, so I will contribute my thoughts on at least a few of these titles.

Update for Monday, 15-December-2013: Here’s my reading list, which has shifted and changed and been added to since its original creation in October:

2. Whisky Charlie Foxtrot, by Annabel Smith (2012) – Read. Not reviewing, for personal reasons to do with the subject matter and my own life experiences, but it’s a good read and I would recommend it. (4/5)

6. Drylands, by Thea Astley (1999) – Read. Not reviewing but it’s marvellous. (5/5) Dramatic aside: I am completely infatuated with Thea Astley. She writes like a dream. The only one of hers I’ve read prior to this is Hunting the Wild Pineapple, which is also stunning. My review of that book is here on Goodreads and here on our site.

8. I tossed into the mix Kate Grenville’s powerful novel, The Secret River, and my review is here on Goodreads, and here on our site.

As of Monday, 16-December-2013, I am suspending my participation in the Challenge until January. This has been my first year to do this, and I find that I get bored reading a whole slew of writers who are all Australian women,  one after another after another, despite their talent and diversity — both of which are substantial, by the way. I have never done any kind of reading challenge before, and I’d not realised that I simply do not read this way, for a very good reason: my attention and appreciation for the books and authors I am reading begin to wane after a while.

I read typically across cultures, but have mostly read books from writers who are British, American, Australian, Japanese, Indian, South American (Columbian, Chilean, et al.), French, or Russian. The books of a bazillion other countries linger in my imagination as far pavilions yet to be discovered. Also, I tend to read across genres and I like to mix up men and women authors (when will we expand this to include alternative genders, I wonder?).

All that to say, I have two books remaining to complete my challenge (although, I have read six books, and only signed up for six, these two were on the list from the beginning: Evie Wyld’s All the Birds, Singing and Fiona McFarlane’s The Night Guest. I will read them in the new year and decide then whether to review them. Happy December reading to everyone!

For anyone who may be interested, here are two trailers for films that I really like, which are based on books by Australian women writers. The first is My Brilliant Career, based on Miles Franklin’s book, and the second is Picnic at Hanging Rock, based Joan Lindsay’s novel.