Beware the Possum Moon of Doom 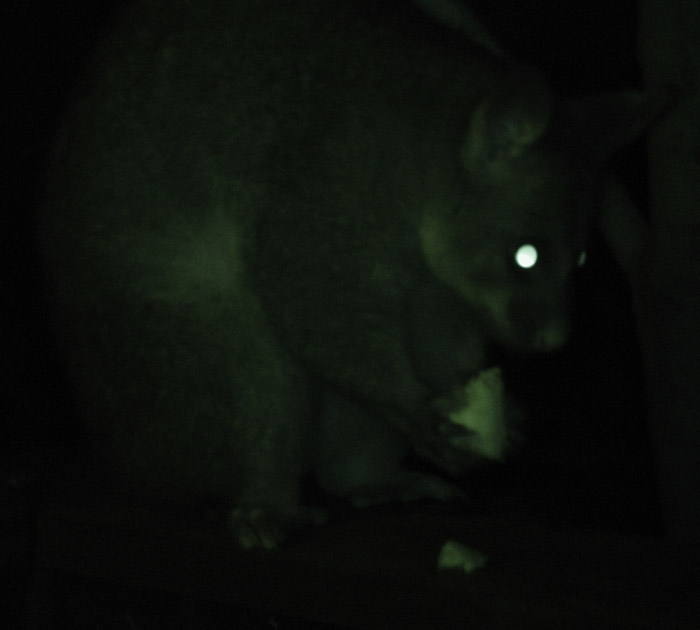 Before my husband and I married, he lived here in Melbourne, and I lived in Houston. We talked on the phone daily, usually during his mornings and my evenings, but that would vary, and the time of day we spoke would inevitably influence what was taking place in our surrounding environments. The first conversation we ever had about possums, which are nocturnal animals that frolic in the Melbourne suburbs come twilight, went something like this:

Him: “There’s a possum in my garden and I am watching it as I talk to you.”

Me: “Ugh. You should shoo it away. They are revolting. I am an animal lover, for the most part, but I find it hard to love feral rats and possums, and possums just look like gigantic rats to me, anyway. Besides, can’t they carry rabies?”

Him: “We don’t have rabies in Australia. Anyway, I think they’re beautiful creatures. Your Opossums must be different from our Possums, I think.”

Me: “Oh. Well, that’s not fair. How come you haven’t got rabies? And, seriously, Australian possums are beautiful?”

We then exchanged information on what we each knew of our native possums, and turned to Wikipedia to pull up some photos.

Me: “Wow! They are beautiful? Why do your possums look beautiful and ours are hideous?”

Him: “Hmm,  it looks like your Opossum is a descendant of Nosferatu.

This is true, I suppose, but to be fair, we should recognise that the North American Opossums cannot help their prehensile, rat-like tails and long, sharp teeth; nor can they do much to refine nails that look like murder weapons from A Nightmare on Elm Street. Perhaps they are lovely once you get to know them, or, you know, from a certain angle and a certain light.

It’s been a decade now since I saw my first Australian possums. Robin and I live in a Melbourne suburb, in a house with a second-floor back terrace and a Japanese Maple overhanging it. We are visited by a variety of local wildlife, only some of which we can indulge with healthy treats.  It turns out that the Sulphur-Crested Cockatoos will merrily devour the terrace, bit by bit, as if it were included in the price of dinner. In order to keep the terrace from utter destruction, we had to stop putting out birdseed for them.

Flying Foxes (fruit bats) frequent the Angophora tree next door, and it is these we suspect of having stripped our almond tree of every last almond, leaving us not even one nut to share between us. The mother and babe Common Brushtail Possums who visit us each evening have caused no problems whatsoever, though, and it’s endlessly entertaining to watch them. They trust us well enough to take bits of apple right from our hands now.

It was during a recent evening feed that I asked Robin, our family photographer, to see if he could get a photo of the two of them. It should have looked something like this and, in fact, the pose you see in that photo is common, since the young one will often grapple for space with the mother, and even snitch its food directly from her mouth (despite the fact that we provide ample fruit and nuts for both of them, and it can eat just as well from the dish).

By the time he got the camera ready, and set up the shot for infrared, the baby had hopped down from the branch, and the night had fully descended. What we ended up with is the scary picture you see at the top of this post.  Robin told me that the shot had not worked out, so I didn’t bother to look at it myself. Then today, as I was looking through our photo folders, I found this photo and thought it was a pretty cool shot of the Moon. I am somewhat Moon obsessed, so this would not be out of place in our photos. I couldn’t make out the possum shape at all, but assumed I was looking at a dark, cloudy night, with obscured bits of infrastructure in the foreground.

Once Robin explained that the Moon was a hollowed-out possum eye, the photo lost some of its beauty, mystery, and charm. Still,  it has something to it, from a certain angle and a certain light. If this were a Tarot Card, it would be telling you that you have no future to speak of: “The end draws near, says the Possum Moon of Doom.” Those hollowed-out eyes do chill my soul.