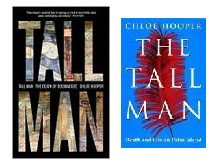 The copy of this book that I have has the original blue cover with a red palm leaf on it and it is called The Tall Man: Death and Life on Palm Island. I prefer that title to the other edition’s – which was called Tall Man: the Death of Doomadgee – because it broadened the scope, which I believe matters: the death of Cameron Doomadgee, tragic as it was, is also not an isolated case. There have been several such incidents of death in custody of an Aboriginal person since I have lived here in Australia. I think that the original title alluded to Palm Island’s representing a microcosm of the Indigenous experience. That being said …

Chloe Hooper possesses rare skills in a writer commenting on such recent and horrific circumstances as the death of Doomadgee: she maintains enough necessary aesthetic distance to stay calm, focused and clear, yet sensitively negotiates a close-enough engagement for us to feel deeply and compassionately about the people of Palm Island. This is an excellent book which describes a complex and disturbing set of social relationships and series of events, culminating in an Aboriginal death in custody. The after-effects are still being felt today, legally and otherwise. The Tall Man does not achieve its impact by use of graphic exploitation, melodrama or grotesqueness, as we are so used to seeing today. I thought it eloquent and subtle in its execution.

I did not find the book one-sided or feel that Hooper was demonising Hurley, but I can understand that others may have experienced it that way, especially if they are closer to the people involved. I am an American ex-pat, having lived in Australia for seven years, and I am still trying to understand the subtleties of race relations and socio-political power structures between the descendants of the original, indigenous peoples of this land and the white descendants of the colonials. Many things are, of course, similar to every other country that has been colonised, including my own; but each country and its people are also unique and it is these layers of difference that I am still working my way through. I found Hooper’s book to be helpful, informative and highly readable and it has helped me to come a bit closer to my goal of understanding.