13 Ways: Sunset at the Hyatt Regency 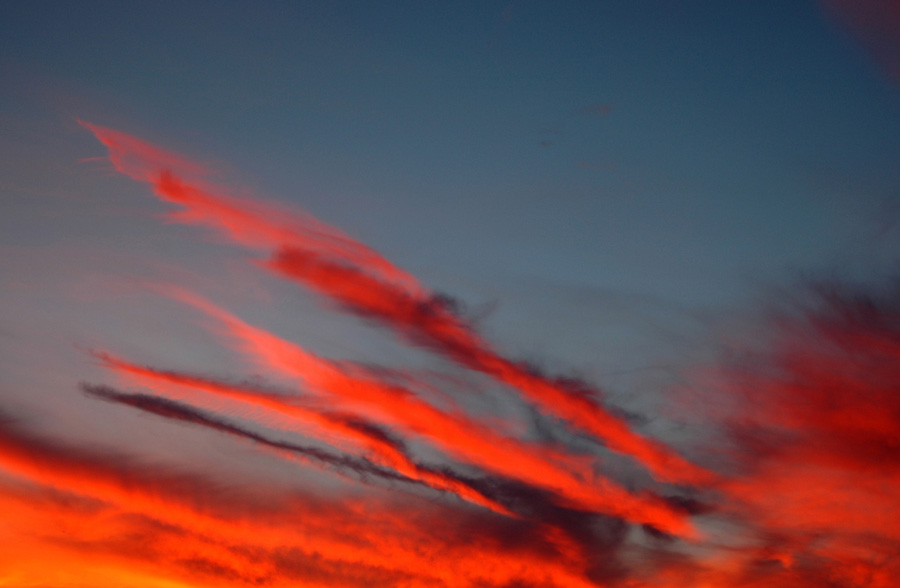 It was 8.00 p.m. in Houston, and Martin should have been landing back home in Chicago by now. What the hell, no one would be waiting. Anna had taken everyone with her in the divorce – their two younger kids and Bounder, their Golden Retriever. He stared out Room 1207’s glass wall, as the girl came out of the bathroom. “What do you call that color?” he asked her, pointing to the sky.

He recognized it was the same color as the walls in the family room, in the house where he used to live. Mostly, though, he was trying to distract himself, to keep from staring at her too intensely, too hard. She was breathtaking in her youth. He’d forgotten what that was like.

“Huh … don’t know, really … guess I just call it sunset!” she laughed, whipped off her jeans and university t-shirt, revealing nothing underneath but a pair of white knee socks, and skin soft as a child’s. She straddled his lap, where he sat on the edge of the bed. He laughed with her, surprised to feel suddenly joyful, having forgotten what that was like, too.

“You are something else,” he said, meaning it, and clutched her tight to his chest.

“I guess that’s a compliment?” she smiled, a flash of perfect white teeth, but then was still and silent, and he wondered if she were having second thoughts. “Look, before we do this, you need to know I’m not cheap. It’s two hundred just for the basics. Anything extra is another fifty on top. That’s for an hour. I can do a half hour, but our flights are delayed anyway, so what’s the rush, right?”

Martin hadn’t understood. He saw her realize it, and felt ashamed.

“Oh right, you didn’t … Okay. Look … uh … I can’t just announce in the airport lounge that I’m … you know … looking for money. I mean, you could be a cop, right? And, anyway, it’s not like this is my real life. I just do it when I’m traveling, because I run out of cash sometimes.”

“Yeah, sure, of course. I understand. It’s no problem at all. Two hundred is just fine.” But he was struggling with his words as he moved her off his lap and onto the bed.

“So, you travel a lot, Jesse?” He sorted through his wallet, found the cash, and set it on top of her backpack.

“When I get a break from my studies, yeah … So, we good to go then?” She opened her arms to him, and Martin spent the next twenty minutes trying not to think about his own daughter, Caroline, who was nineteen and away at college in Miami. Mostly he failed in his efforts, and eventually succumbed to the hopelessness of the situation. Jesse remained smiling throughout, playful and sweet, until he pulled away from her to rifle through the mini bar. Only two hours earlier he’d been surprised and flattered by her sauntering over to him in the lounge for a chat. He’d bought her a coffee. Now, he wished she would stop flirting with him, and wondered if she was like this with all of her customers.

“How about a drink? You want a Coke or something?” he asked her, pouring himself a Jack Daniels. “Oh hey, I’m not that young, you know. I’m working on my PhD, not an undergrad degree. Can’t a girl get a real drink?”

He mixed her a whiskey and Diet Coke, which sounded disgusting to him, but she seemed to enjoy it. “So, what are you studying?” He slid his jocks and slacks on.

“We done here?” she seemed surprised, but not unhappy about it.

He watched her compose herself on pillows to sip her drink, but he noticed she made no move to dress. In naked repose, she seemed to him a being of perfect integrity, every piece of her just as it should be. He realized that she was beautiful, but this merely depressed him now. He looked around for his tie.

She’d stopped smiling and was watching him move around the room. “I’m in the middle of my Psychology thesis. It’s about complicated grief. Know what that is?”

He wondered briefly if he should iron his shirt, in case he ran into any colleagues on the plane, but decided just to keep his jacket on. “Complicated grief? Isn’t all grief complicated?” He regretted sounding flippant. “Sorry, no – I guess I don’t know, really.”

Jesse was silent, sipping her drink.

He’d finished dressing, and was looking away from her, seeing the final wisps of clouds fade as the night fell. Anna would have known the name of that color. It was something like Desert Flower or Sunset Rose. Martin had learned over the years that paint swatches and fabric colors were never simply “blue” or “orange” as he’d imagined before marrying Anna, who was an interior decorator. Whoever named these shades imbued them with wistful romance. Clearly, this job required an artful and nuanced response to an unspoken truth: that people who spent hundreds or thousands of dollars to change their lives with a coat of paint needed it to be called Streaming Fire or Flaming Beauty, rather than Red number 485.

Anna had understood that, too, and he recalled the devotion with which she had attended to her clients: “I’m not just painting their walls and hanging their curtains, Martin. I want to give them a perfect world to inhabit. I’m helping them to realize their dream about whom they want to be.”

“Hey, Martin?” Jesse spoke from the bed, startling him, because he’d half forgotten she was there.

“You understand what?” He faced her then.

“You know, older guys, like fifty or whatever. You’re all stressed and in a hurry and worried about a lot of stuff all the time. So you can’t always perform like you want. That’s okay. I mean, it’s really okay. I think you’re a nice guy, that’s all I wanted to say. And I would even do this for free, you know, with you. But I’m kind of broke at the moment.”

“Oh, is that what you wanted to say?” Martin stared at her, astounded by her directness. She was so young.

He laughed then, and felt good again, like receiving a gift from nowhere.

“The color. It just came to me. It’s called Flanders Poppy, at least from the store we bought it. You know what Flanders Poppies are?”

“No, I guess not. I mean, rings a bell but I can’t remember why.” Jesse stood up and began to dress, which took her all of twenty seconds, even with her sneakers to tie. As she leaned over to do this, Martin stuffed another three hundred dollars into the front pouch of her pack, for her to find later.

“Well, when I was a college student, History was my course of study. The Flanders Poppy is an iconic symbol of the soldiers who died on the battlefields of World War I. A poem was written by one young man who watched his friend die. I don’t know if I can remember it all, but it starts off, ‘In Flanders fields the poppies grow, between the crosses, row on row, that mark our place … ’  Martin stopped there, embarrassed to hear his voice catching in his throat. “Well, anyway … You know the poem?”

Jesse had finished gathering her things and stood watching him, listening to his recitation. She stared at him for several seconds before responding, “I don’t think I know it, Martin, but it sounds sad.”

Martin glanced around the room for anything he might have left behind. He walked with her to the door, grabbing his briefcase on the way.