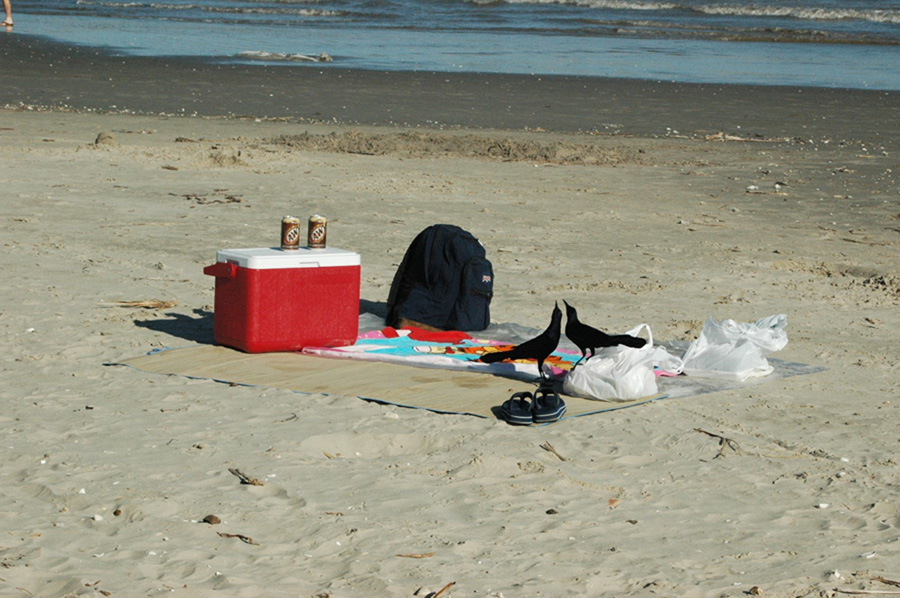 She never liked it when the sand was messy, preferring to find an unfrequented patch of shore, where the only footprints were those of seagulls. Yet he would insist on plunging into the beach with both hands, digging and gouging like a wayward child seeking China.

What was worse were the artless structures he would erect, piled high and higher still, leaning this way and that – ugly but fragile – begging to be slammed to the ground, and then pummeled into the beach, where they towered like sentinels.

He was helped in this by the waves, as he would build always at the water’s edge, taunting the sea to reclaim his monoliths – or perhaps he meant them as an offering.

What she did know was that this had become his ritual upon arriving at the shore, on those yawning summer afternoons, while she watched – as surely he wanted her to do – inwardly shaken by a terror she could neither recognize nor articulate.

Distracting herself was sometimes easy, sometimes not.

She unpacked and laid out on the blanket her own expressions of art: baskets and bowls of food, which she’d created with a fussy attention to detail: just the right amount of crispness to the golden fried chicken; sweet paprika on creamy potato salad; tropical fruit tossed with cream; most importantly, a chilled shaker of martinis to take the edge off the heat and her nerves.

A thermos of hot coffee awaited them at the end, after which they would pack up the car and return to their ordinary days and nights, to the dove-white town house with the matching hybrid tea roses in the courtyard. She considered those pale and delicate blossoms now: how to keep at bay the insidious fungi and insects? Things were easily destroyed.

A pair of grackles stood on a nearby blanket, pecking at the crumbs left there, and she wondered when the couple who had set up this ad-hoc picnic might return. They had not bothered to safeguard anything, from passers-by or local wildlife.

They were not young, so she had been surprised to see the two of them, hand in hand, run laughing down the beach, and then – she supposed believing they were out of sight – strip off their shorts and tops, plunge into the sea, and head out past the reef.

She had watched until she could no longer make out their heads bobbing like corks in the waves.