My husband, Robin, and I have been celebrating our 7th wedding anniversary over the past week. The highlight was his booking a few nights for us at a cottage by the Gippsland coast, near a place called Morgan’s Beach. We set off from Melbourne on Tuesday afternoon and reached our destination about three hours later: a rambling farmhouse, in the middle of a pasture, at the end of a dirt road. Perfect. 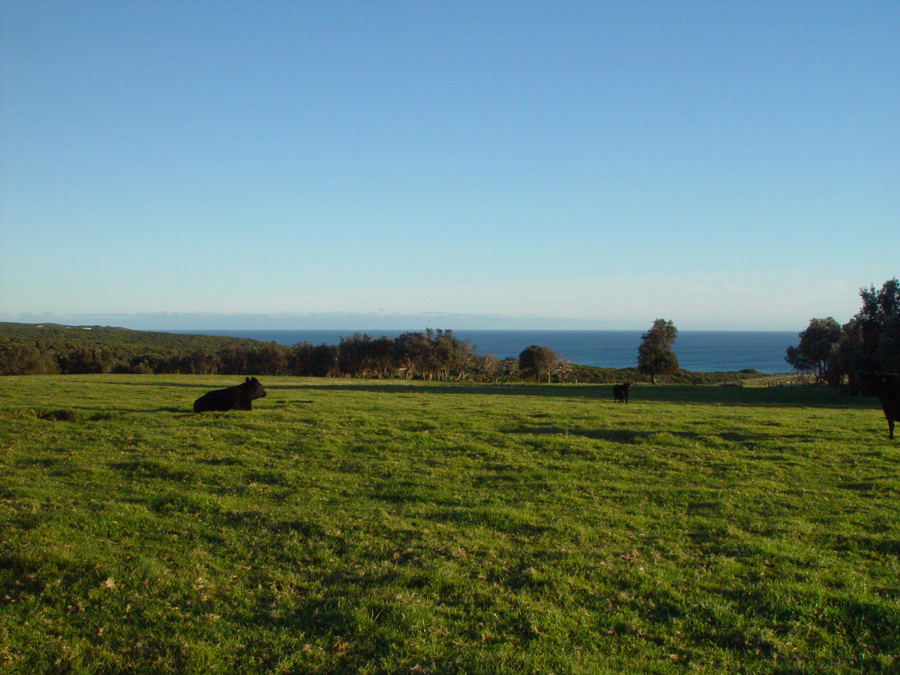 Side note: I noticed when we were leaving on Friday that there was an old axe leaning on the woodpile stacked at one end of the front porch. My husband had been coming and going from that pile of wood for three days, as the fireplace was our only source of heat. I realised he had left the axe outside throughout our stay. Can you imagine? It’s like he’s never fantasised about our being attacked by an axe murderer in the middle of the night in a remote country house. Clearly, he has seen far fewer horror movies than I have. I felt compelled to explain, just in case this comes up on future holidays, that we really should have brought it inside. To his credit, once I mentioned it, he grasped how it might be seductive to roving psycho killers in the area. Also, we reasoned that, if the axe were inside with us, then we would be armed and ready for the demented bastard. (Before you label me an hysteric, remember that Australia is notorious for its serial killers). 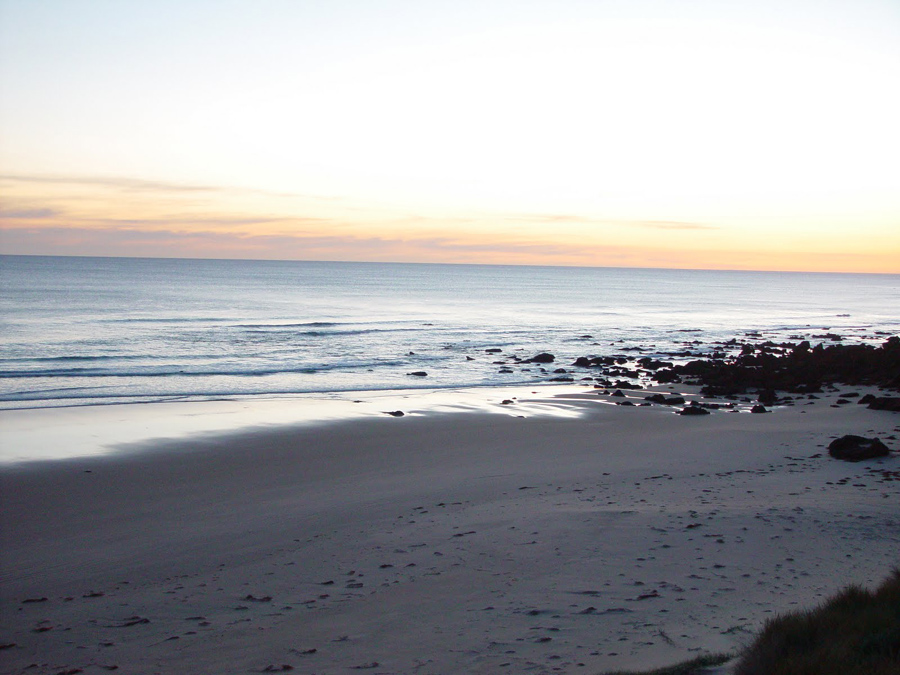 We were the only people around for at least a kilometre in any direction, if you don’t count cows, wombats and kangaroos as “people.” As it is winter here in Australia and our state, Victoria, gets achingly cold (especially at night), it is not such a surprise that we had complete solitude. But it is beautiful here in winter, the usual harshness of the open coast subdued by cool air and soft light. 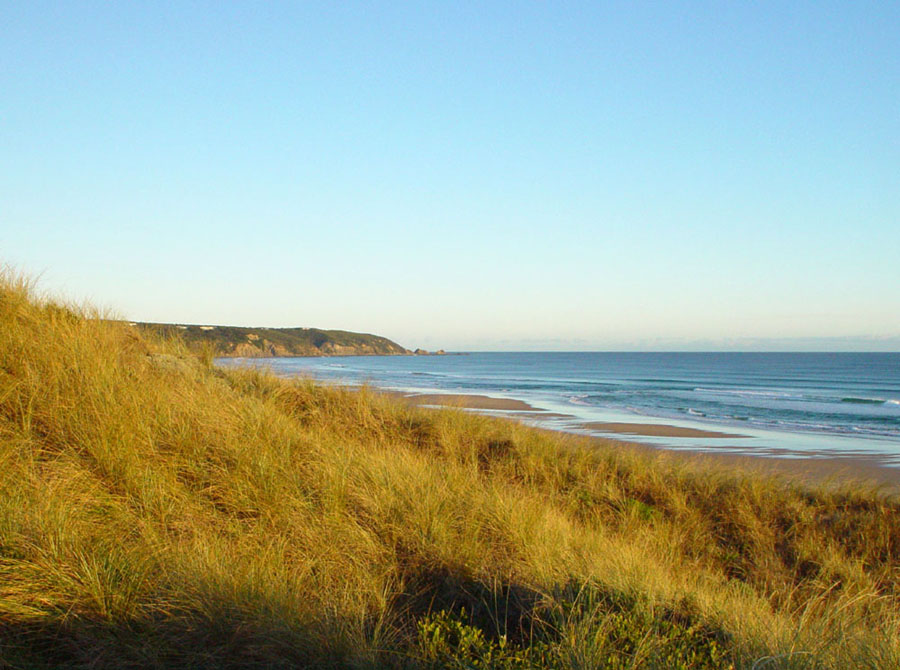 Happy in our privacy and surrounded by acres of lowing steers and wild ducks, we enjoyed a peaceful evening cuddled up on a couch by the fire. Fortunately, we are not the type of urban folk who can’t sleep when it’s too quiet. We slumbered deeply and peacefully, the only sounds entering our dreams being the cawing of ravens and the carolling of magpies, with waves crashing in the distance … Oh yes, and possums scuttling on the roof and the fluttering of micro bats’ wings (see links 1 & 2).

Side note: Have I mentioned that we have bats in Victoria? Actually, we have lots of bats in Victoria, of both the megachiroptera and microchiroptera suborders. There were none of our familiar fruit bats where we were staying, though we enjoy their presence at home as they swoop through our back garden to rest in the neighbour’s Angophora tree. Bats add a romantic Gothicism to the night, especially when complemented by a full moon, which rose dutifully on Wednesday evening.

We ventured out into the paddocks that first afternoon, planning to meander down to the cliffs then onto the beach, but we failed to account for the heavy rains that had fallen overnight. We were not wearing mud boots or slickers and it was too cold to trudge onward while getting wet and splattered, the damp seeping through our clothes and shoes. The dead Angus steer lying off to the side of one of the grazing pastures had a “beware all ye who enter here” feel to it. My feet became mired in swamp mud, while my husband provided encouragement, and the steers stared contemptuously at us from what seemed a great height (they had all managed to stay on high ground and we thought we could hear them muttering “stupid bloody tourists”). Just as I was about to cry, we managed to clamber up the slippery hill, whereupon we decided to find a path back to the house, change our clothes and shoes, and head off another way.

This turned out to be a great idea because once we got down to the beach, we saw these amazing natural sandstone sculptures. 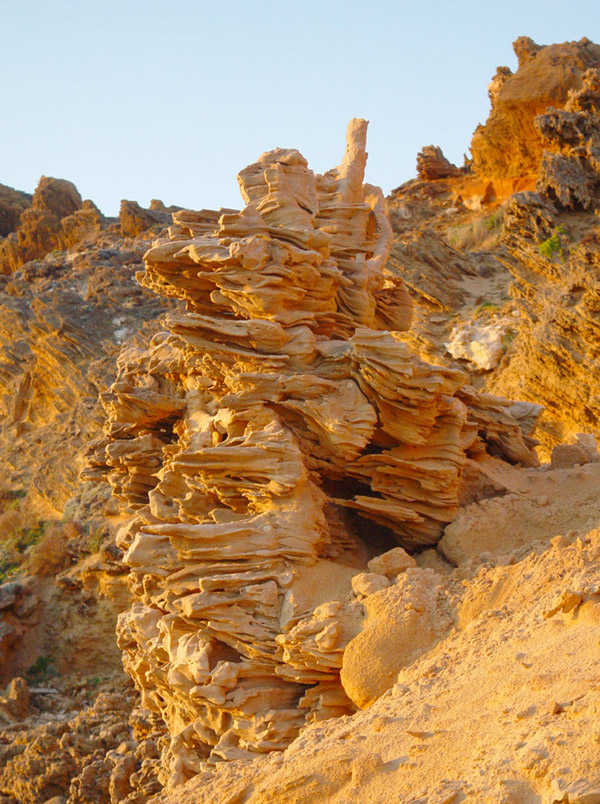 We shared a sunset over the sea and a moonrise over the cliffs, simultaneously. This was exactly as gorgeous as it sounds. 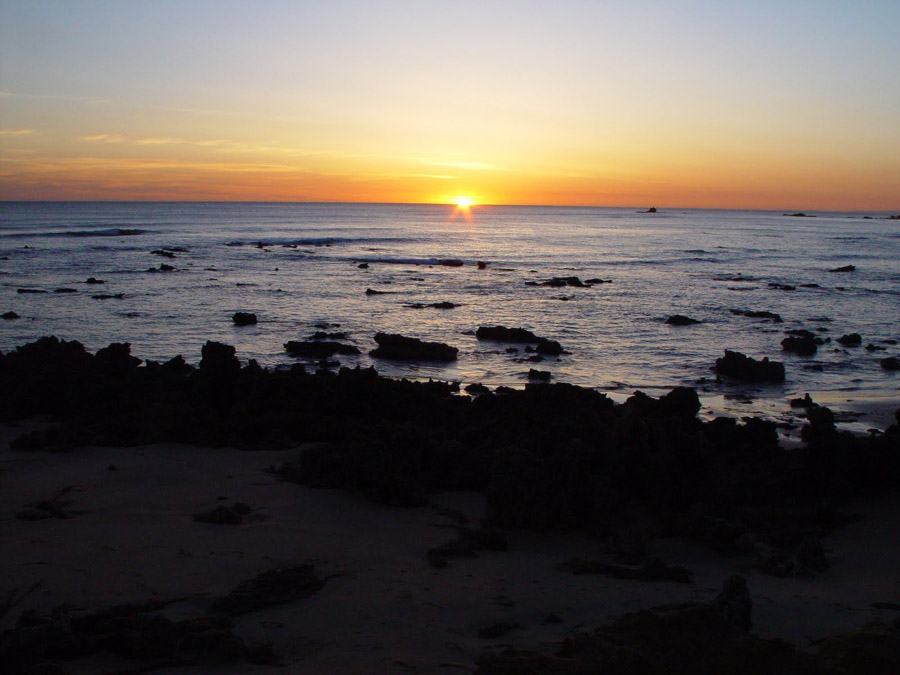 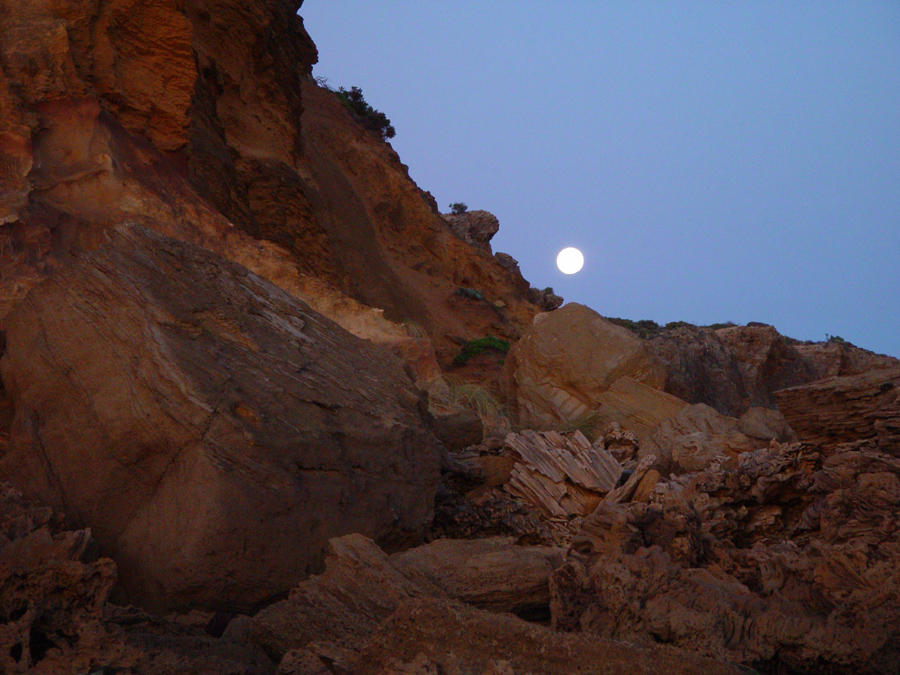 This small achievement of making it down to the beach is a common event for your average Aussie, but compared to the swampy paddock fiasco we’d just scrambled our way through, it felt like a celebration. This Wednesday evening amplified our confidence in our wandering-in-unknown-places abilities, by about a million. On Thursday, we figured we were ready for the adventures of extreme coastal walks. We are easily encouraged and take to self-flattery like platypuses to water.

This must be true of Robin and me; otherwise, how to explain the wild conclusion we drew while standing safely at the base of a hillock on some farmland, surveying what can best be described as the world’s biggest mass of brambles: Why, of course we can hoist ourselves over this fence and create our own path to the cliffs, through acres and acres of snaky, interlaced coastal flora! How hard can it be? 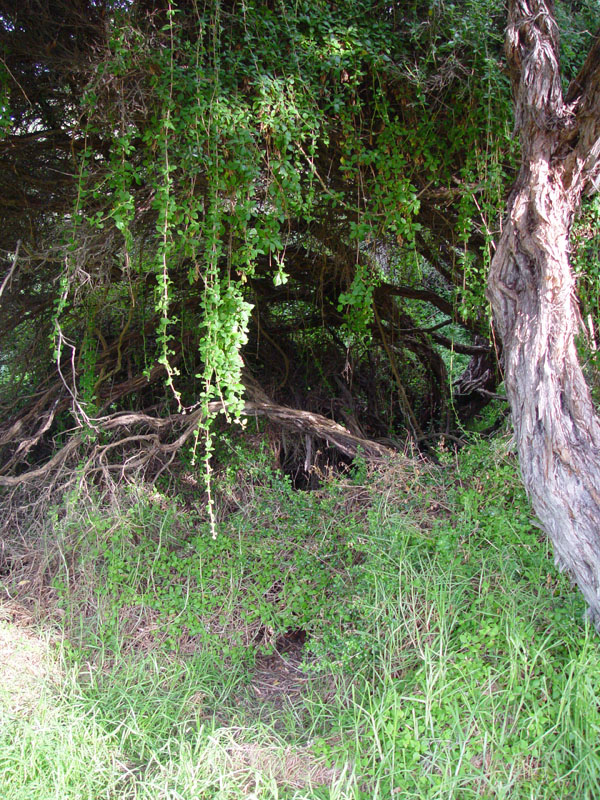 We did eventually reach the coast, where we found ourselves at the cliff’s edge with no pathways down to the beach and no clear trails along the cliffs back to our Kombi. Turns out, despite how clear-cut it looks on Google maps, you cannot simply amble along at the cliff’s edge because there are undulations and breakages in the land continuity which prevent that. So, we ended up back in the morass of vegetation from which we had emerged only moments before.

We did have a marvellous view from the cliff, though, and we discovered … 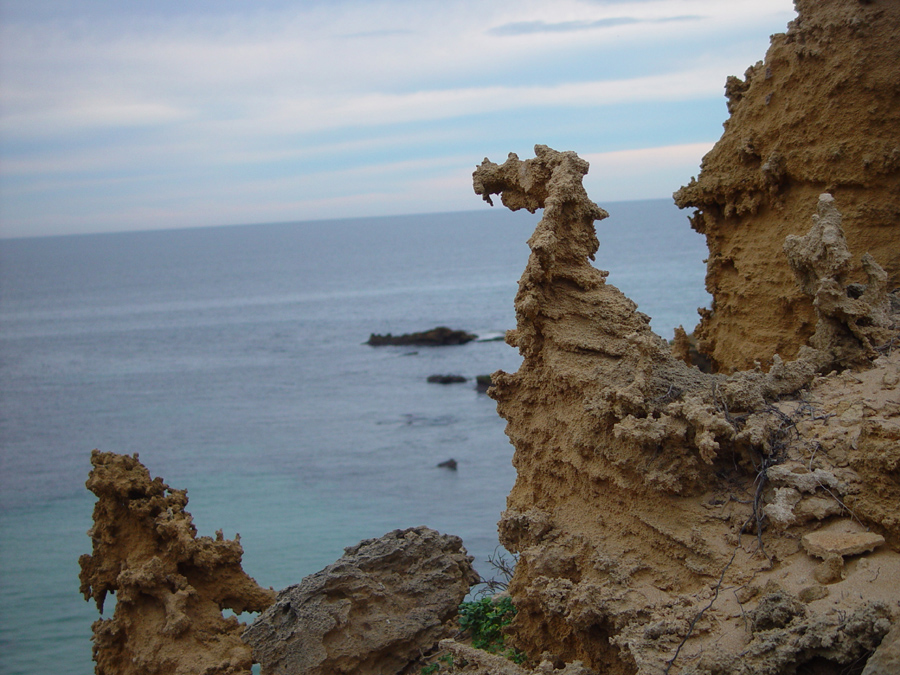 Puff the Magic Dragon really does live by the sea, where he spends his days contemplating his realm and no doubt takes flight after sunset each evening.

We realised eventually that we were never going to make it to the dinner we’d planned with some friends for that evening. Robin and I were nestled in some bushes we could not identify, eating jelly beans and looking for our torch (flash-light) when this fact occurred to us. We soon found an open patch where we watched another glorious sunset over the sea while wondering how we were going to prevent hypothermia, since it looked increasingly as though we would be spending the night bundled in the branches of coastal tea-trees and whatever else engulfed us. Occasionally, we would hit a high, clear spot such as this one, which afforded a glimpse of freedom, only to realise that we still had far to go, with no sure path either to the beach, or to the familiar paddocks.

We were getting pretty despondent by the time we’d clambered out of a deep sandpit to the top of a dune (yes, there were sandpits in the midst of all the shrubbery), to see that we were still surrounded by greenery in all directions. We ploughed onward. At times, our feet were not even touching the earth, as we were borne aloft by the clustering plants; other times, we would plunge beneath it all, tunnelling through under brush like wombats.

Which brings me to another piece of advice, for myself and others who may be nutty enough to take on the Australian coastal bushland despite no practical skills or tools for doing so: like axes, machetes are useful things. It is a good idea to keep one with you as you never know when it might come in handy (take it out of your handbag before you get to the airport, though). 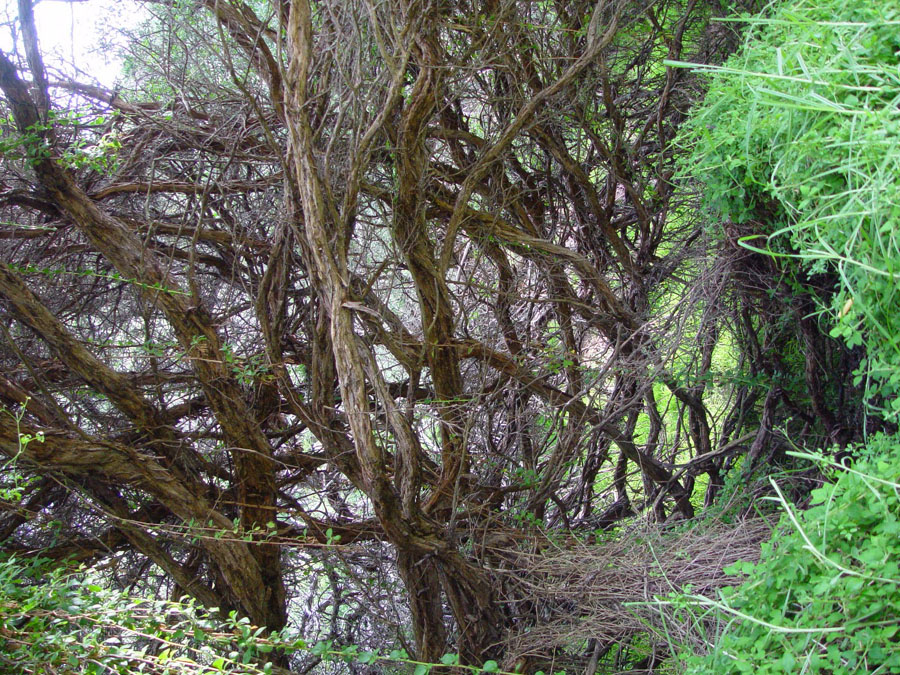 Because I am writing this, you know we made it out alive (with only a few scratches and a whole bunch of twigs in our hair). After arriving back at the house, we composed ourselves with a hot shower, a hotter fire, good food, and a bottle of New Zealand Pinot Noir.

Lucky for us, any Aussie serial killers vacationing in the vicinity apparently had other things to do because they never visited us. It is entirely possible there is an overly confident psycho out there on a stretch of remote Gippsland coast, crashing his way through a diabolical thicket and cursing himself for leaving his machete back at the cabin. But at least he can enjoy an awesome sunset over the ocean when he pops his head up from time to time to see how far he still has to go. 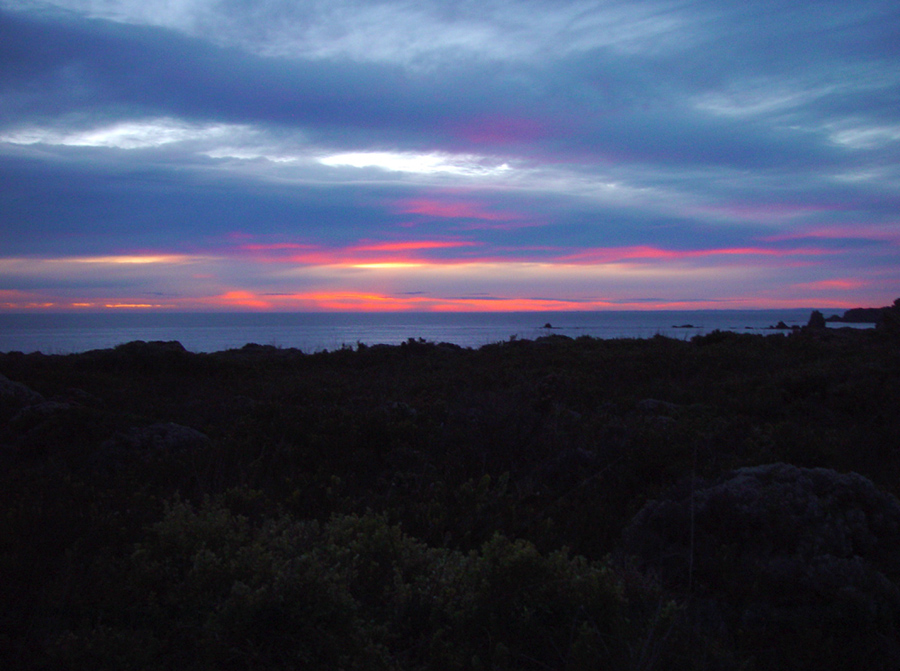 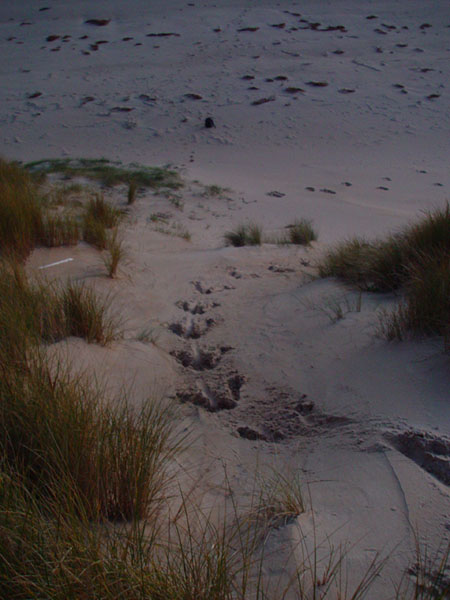